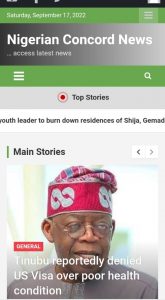 Yesterday, we ran a report that the ailing presidential candidate of the All Progressive Congress, Asiwaju Bola Tinubu, and his people were denied United States Visas.

Tinubu had wanted to visit the US president, Mr. Joe Biden, as part of his consultations prior to the 2023 general elections.

Although, Tinubu’s official media team or even the US Embassy in Nigeria hasn’t denied the report, some unofficial social media loyalists of the ruling party tagged Nigerian Concord Newspaper a PDP/Atiku newspaper, carrying fake report about Tinubu.

For the sake of peace, we challenge the Campaign Council of Asiwaju Bola Tinubu, his official media team as well as the national headquarters of All Progressive Congress, APC, to issue an official statement to deny the report. They won’t because they are aware that the US Embassy will come hard on the former Lagos State governor if they further deceive Nigerians.

We also challenge the US Embassy to issue an official statement to deny the fact that Tinubu and his people weren’t denied US Visas recently if truly we are not sincere with the report. If this happens, then we will apologize openly to Senator Bola Tinubu, and see it that our source has failed us.