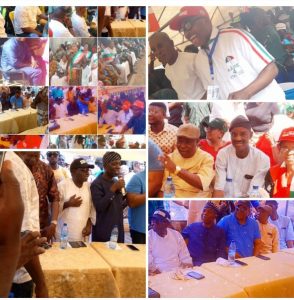 There was a standstill and huge turnout in Akure South local government today as Akure 2023, the most influential pressure group in the People’s Democratic Party in Akure South and its environs flagged-off her Ward Interaction today.

In his message of hope, the coordinator of Akure 2023, Hon. Prince Tony Ala said that members of the party must be ready to fight for the liberation of Akure, stressing that Akure had been behind since 1983 that the first eleven of the town were killed in a political riot.

Tony Ala said that members in Akure must work together for Eyitayo Jegede to be successful, noting that it was when he returned back to participate in the politics of Akure that the town began to see light.

According to him, Akure was shortchanged in 2016 and 2020 because PDP wasn’t in power at the federal level, stressing that it is the reason to work for the party to win at all levels in the forthcoming general elections.

Prince Ala said lots of people are doing PDP in Akure South today because of Eyitayo Jegede who is the symbol of the town in Nigeria.

He berated those from Akure that are still holding secret meetings in the Southern Zone of the state to work against Akure governorship in 2024, saying that they are enemies of the town.

Tony Ala said: “We should not look back or be angry with any candidate. We must all ensure that all our candidates from the Presidency to the Senate, house of representatives and house of assembly win in 2023 so that the governorship which Akure has been looking for can come easily in 2024.

Tony Ala who berated the APC administrations both at the federal and in Ondo state for making life difficult for the people since they assumed power in 2015 said the people should take a clue from Oyo and Osun states that had liberated themselves by voting out the wicked party.

He urged voters to collect money from the APC on the election days and vote for all the candidates of the People’s Democratic Party.

Also speaking, a former House of Representatives candidate of the PDP, Barrister Muyiwa Adu lauded the Akure 2023 group for fighting for the love of the people of Akure, stressing that those castigating the group are just being malicious.

Barrister Adu however berated those that are pulling down Barrister Eyitayo Jegede, saying that Akure needs him to be successful over Atiku’s election so as to achieve governorship in 2024.

In his remarks, the deputy coordinator of Akure 2023, Honourable Dele Faboro urged voters to go and get their PVCs at the Independent National Electoral Commission, saying that they are ready for collection.

Dele Faboro thanked all attendees at the event and urged them to vote for all candidates of the People’s Democratic Party in 2023.

According to him, the group won’t relent in its agitations for Akure governorship in 2024. He noted that Atiku’s presidency will make it easy.

In his lecture on why Atiku’s presidency is needed, Reverend Tayo Abisola said the PDP candidate is a unifier who married his four wives from all the tribes in the country.

Abisola said Atiku will not shortchange any tribe since he is an in-law to all.

According to him, it was Atiku as vice president that developed the economy of the country and discovered people like Iweala, Jegede, Adesina, Chidoka, Obi, Soludo and a host of others who helped Obasanjo to develop the country between 1999 and 2097.

He said: “Atiku helped Obasanjo to fight corruption by bringing the idea that led to the formation of the EFCC and ICPC”

Earlier in his opening speech, the leader of Ward nine, Dr. Omomo described the PDP as a peace loving people which will bring developments back to Nigeria if elected in 2023.

He assured the audience that Akure will easily get governorship in 2024 if is elected in 2023.

In her speech, Woman leader of Akure South PDP, Hon. Mrs Seun Adanri urged the audience to go out and preach the gospel of Atiku/Okowa so that development can return back to the country.

Adanri said that voting for Tinubu is like working for the third term of President Muhammadu Buhari whose government has brought serious hardship on people of the country.

Speaking also, chairman of Ward eleven in Akure South, Mr. Kole Fabiyi said that he has realized that Akure 2023 group is fighting for the truth and not descriminating any candidate or anybody in PDP , Akure South local government.

Fabiyi berated the people that are castigating Akure 2023 group, saying that they are the real enemies of Akure for working against Eyitayo Jegede’s 2024 project.

Candidate of the party in Akure South Constituency Two, Adeniran Adeolu ADX begged the electorate to vote for PDP at all levels on the election days so that the hardship brought upon Nigeria and Ondo state by APC can be stopped.