The police authorities in Makurdi, the capital of Benue state have invited the disputed governorship candidate of the All Progressive Congress in the state, Reverend Father Hyacinth Alia for questioning over an allegation that he used his media consultant, Mkor Aondoana to defame one Torkwase Alaaga.

According to a document obtained by Nigerian Concord Newspaper at the police headquarters in Makurdi, Alia who is said to be on the run as at the time of filing this report is required by the police to answer questions on a media report that he told his media handlers that he once cured the said woman who is in her later thirties of “an intractable and highly complicated staphylococcus and gonorrhea infection.

Recall that Mkor Aondoana who is the official media consultant to Father Hyacinth Alia had a month ago posted on the social media that the embattled governorship candidate of the Benue APC once told him that he cured Torkwase Alaaga of an intractable and highly complicated staphylococcus and gonorrhea infection which ravaged her vigina when no orthodox and unorthodox medication could cure her. (A screenshot of Mkor’s statement on this attached below) 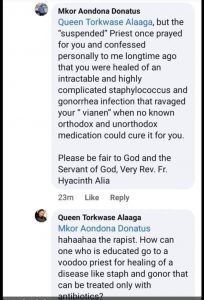 Alaaga according to findings wanted to take a legal action immediately but was prevailed upon by friends and family. She however filed a petition to the Inspector-General of Police against Mkor and Alia so they could explain where and how he cured her of an intractable and highly complicated staphylococcus and gonorrhea infection as written on a public platform by his official media consultant (Mkor).

Mkor was picked up by the police while trying to board a bus to Ghana and was detained. At the detention, Mkor was said to have confessed to the allegation and still maintained that the disputed governorship candidate told him what he posted about Torkwase Alaaga about a month ago.

After Mkor’s confession, the police immediately wrote Father Hyacinth Alia to come and answer questions on the damaging media report that he cured Alaaga of an intractable and highly complicated staphylococcus and gonorrhea infection.

According to a police source in Makurdi who spoke with our reporter this evening, the Benue APC governorship candidate has switched off all his telephones since he was invited for questioning. He was also said to have been on the run.

Another source in Makurdi told our reporter that the candidate is making arrangements to meet with the minister for special duties and intergovernmental affairs, Senator George Akume on how he can get the police off his back.

Nigerian Concord Newspaper also gathered that Father Alia has sent a lawyer to Mkor to find a way to change his statement with the police. This according to report prompted Mkor to send a message to a platform where he claimed that his detention was masterminded by the People’s Democratic Party in the state as a result of his supports for Alia.

Writing on a private WhatsApp platform named GEORGE AKUME WELL WISHERS today, Mkor confirmed that he is still in detention at the police facility in Makurdi but indirectly claimed that it was the PDP that ordered for his detention because of his rigid protection and advocacy for the actualization of the “Alia/Ode” governorship objective.

A screenshot of the private message Mkor sent to the George Akume well wishers WhatsApp platform which was obtained from one of our sources in the group is attached below. 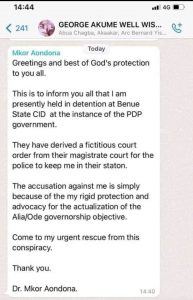 In the private WhatsApp message which Mkor sent to the platform, the dismissed BSU lecturer also confirmed that a court order to remand him in prison had been sought for and got from a Magistrate Court in Makurdi by his accuser.

Copies of the court ruling which remanded Mkor are attached below. 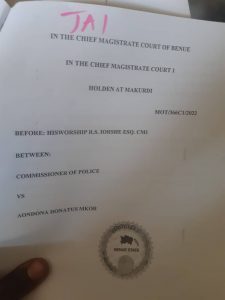 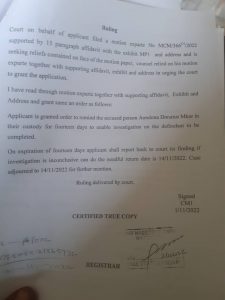 The accuser had asked the court to detain Mkor in the prison and also invite and detain Alia so a comprehensive medical examination can be carried out on her if truly she had been cured of an intractable and highly complicated staphylococcus and gonorrhea infection as claimed by the dismissed BSU lecturer a month ago.

Delivering the ruling, the Chief Magistrate said that the application of the complainant was granted so that the accused can be detained for 14 days when an investigation will be carried out.

All efforts to reach Father Hyacinth Alia by this newspaper were abortive as all his telephones have been switched off.