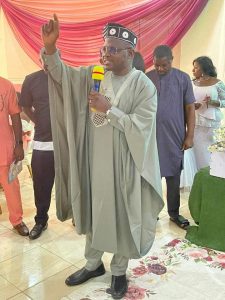 Special Adviser to Governor Samuel Ortom on Media and Publicity, Mr Terver Akase says that the People’s Democratic Party
as a party that is looking forward to reclaiming power from the ruling All Progressives Congress needs to be united more than any other parties that are in the race.

This is just as he said that Governor Samuel Ortom has no personal grudge against the embattled national chairman of the party, Senator Iyorchia Ayu.

Akase said these today while speaking on Arise TV breakfast programme, “The Morning Show”, noting that the party should quickly address the agitations of the five aggrieved governors in order to be sure of victory at the 2023 presidential election.

Saying that genuine negotiations should begin now, Akase stressed that there should be no room for arrogance when negotiating and that it’s not too late for reconciliation to take place.

His words: “Arrogance is not supposed to be part of negotiation, dialogue is what should be on the front burner. A party that is seeking to take power back to itself, needs internal unity more than anyone else, and governor Ortom has said that it’s not too late, we still have some months”

He also revealed how Governor Samuel Ortom begged stakeholders of the Peoples Democratic Party to elect Senator Iyorchia Ayu as the party’s National Chairman of the party.

According to him, Governor Ortom met with other governors begging them to give his state the position prior to the emergence of Ayu as Chairman of the party.

“It was Governor Ortom who met with other governors and persuaded them that the National Chairman should come to his state and that he will take responsibility. He convinced them and when they agreed, he brought Senator Ayu,” Akase stated.

Speaking on the call for Ayu’s resignation by the five aggrieved governors, Terver Akase maintained that Ortom has no personal issue with the party’s National Chairman but was only insisting on equity, fairness and justice in the party.

Saying that Ortom remains committed to the amicable resolution of PDP’s internal wranglings at the national level, Akase who reacted to comments credited to the party’s National Chairman where he was quoted as saying he had the powers to stop anyone including Governor Ortom from contesting election on the platform of the party said the comments of Dr Ayu were needless as the constitution of the party and the Electoral Act does not permit such an action.

Saying that Governor Ortom remains the PDP Senatorial candidate for the Benue North-West Senatorial district for next year’s general election, Akase said: “The blocs in the seven Local Governments that make up the Senatorial district have unanimously endorsed him. On several occasions, they have come to say he is the man they need to represent and speak for them and other Nigerians at the National Assembly,”

He maintained that the national leadership of the party has failed to use the conflict resolution mechanism to address the problems that arose from the national convention of the party as well as the circumstances surrounding the choice of a running mate for the Presidential candidate.

Akase pointed out that it was Ayu who willingly promised PDP stakeholders that if the presidential candidate of the party emerged from the northern part of the country, he would resign from his position, saying that the aggrieved Governors were only asking the National Chairman to keep to his words and honourably resign.

The Governor’s spokesperson, however, expressed optimism that the crisis could still be resolved as the five aggrieved Governors were open to peace talks, stating that “It is not too late for the national leadership of the party to correct the wrongs and make amends. A party that is seeking to rescue the country from the APC misrule, the PDP needs internal peace and unity more than any other party.”

According to Akase, the five Governors are critical stakeholders of the party who he noted: “have contributed greatly in building the party over the years, emphasizing that they cannot suddenly turn around to destroy the party they have built over the years.”

On the comments made by the PDP Presidential candidate about the recent killing of Benue people in Gbeji by armed Fulani herdsmen that the herders be integrated into Benue communities, Mr Akase described the statements as unfortunate and unacceptable.

“Alhaji Atiku Abubakar is a former Vice President and we expect him to be the nationalist, patriot and unifier that he says he is. So for him to make such comments when people were killed in Benue State by the Fulanis, it is unacceptable,” he said.

Akase further stated that neither Governor Ortom nor the people of Benue State have any issue with the Fulani, adding, however, that what the people will continue to resist is the attempt by the marauding herdsmen to take over the land which is the heritage of the people.