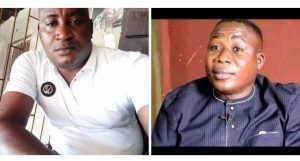 The police authorities in Abuja has declared wanted one Elufadejin Taofeek Olalekan, an associate of the Yoruba national agitator, Chief Sunday Igboho.

According to a media note from the office of the Public Relations Officer of the Nigerian Police Command, Olalekan who hails from Osun state was one of the people that were causing mayhems in Nigeria in the name of agitating for Yoruba nation.

The police authorities said that the suspect who is at large luckily escaped a police raid on Sunday Igboho house who was arrested, arraigned and granted a conditional bail in Benin Republic recently.

The police had indicted Olalekan, a staunch member of the Oodua People’s Congress of masterminding the anti government rallies in Kwara, Ibadan, Sound and some states in Nigeria.