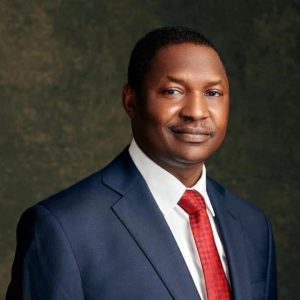 Facts have emerged on how the Attorney General of the Federation, Abubakar Malami is planning to manipulate tomorrow’s court ruling in the case between Chief Michael Kaase Aondoakaa and the disputed governorship candidate of the Benue state APC, Reverend Father Alia.

This newspaper gathered that one Pius Akutah, a level 13 officer at the Federal Ministry of Justice has been going round telling people that the minister of Justice, Abubakar Malami had instructed him to hold a meeting with the presiding judge so he can manipulate tomorrow’s ruling which obviously favours Chief Aondoakaa.

Akutah who is also an assistant chief legal ofricer in the Ministry also told people that the minister of special duties and intergovernmental affairs, Senator George Akume is also part of the struggle to manipulate the ruling in favour of Father Alia.

Meanwhile, it was not confirmed if Akutah has been able to get across to the presiding judge on the order of Abubakar Malami as at the time of filing this report.

Recall that Aondoakaa went to court to challenge the governorship primary election of the Benue APC which fraudulently produced Father Alia as the party’s candidate for the 2023 election.