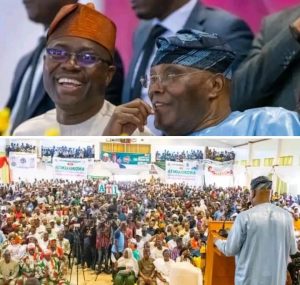 It was a very warm reception for the PDP presidential Candidate in the forthcoming general elections, Atiku Abubakar, during an interactive session with the Party stakeholders and supporters, who came out in their numbers to receive him and his entourage today, in Ibadan, Oyo State.

In his opening speech, the National Chairman of the Party, Senator Iyochia Ayu, who was represented by the Deputy National Chairman North-Amb. Iliya Damagun, on behalf of the National Working committee of the Party warmly welcomed the former Vice President to the interactive session and equally used the occasion to eulogize the Governor of the State, Engr Seyi Makinde, for the developmental strides his administration has so far recorded in the state which is a testimony of good leadership from the PDP.

The acting National Chairman equally used the opportunity to felicitate with the Presidential Candidate Atiku Abubakar, for winning the party primary election in Abuja and equally paid glowing tributes to the former Vice President, for his determination to rescue Nigeria from the maladministration of the current APC government, while recognizing his background as a thorough bred Nigerian who was born in the North and enjoys enormous goodwill across the length and breadth of the country.

Senator Biodun Olujimi, who spoke on behalf of the PDP National Assembly caucus, praised Atiku Abubakar for his humility and forthrightness in leadership which she stated that Atiku displayed to the admiration of all, while serving the country as the Vice President.

Senator Olujimi enumerated Atiku’s successes both in public and private enterprises and that being a man who climbed to the top through hard work, she and her colleagues believe that the former Vice President stands out as the right person the country needs at this time. She assured Atiku that the entire South West will fall behind him and ensure he wins the forthcoming presidential election.

The former Governor of Osun State Chief Olagunsoye Oyinlola, who was equally a former National Secretary and currently the leader of the Party in the South West paid glowing tributes to the former Vice President and assured Atiku that the party in the South West is united and will walk the talk in making sure their set goals are achieved in the 2023 general elections.

The Governor elect of Osun State, Senator Ademola Adeleke, eulogized the former Vice President, whom he described as a worthy in-law of Osun state and pan Nigerian, known all over the country as a unifier, bridge builder and tested leader with a blueprint that will salvage the country.

Senator Adeleke used the platform to call out the entire Yoruba race to support the presidential ambition of the former Vice President; hence his victory will ensure prosperity, peace and stability in every home in Nigeria.

The Governor elect enjoined all party stakeholders to sheathe their swords and rise above the past, by embracing the future in the best interest of Nigeria. The Osun state governor-elect called on everyone in the South West region to work collectively towards ensuring total victory for the party in the 2023 general elections.

Governor Seyi Makinde welcomed the former Vice President to the region and charged him to use his wealth of experience to look into some of the contending issues which some stakeholders in the party are clamoring for, in the spirit of unity and inclusiveness.

Governor Makinde assured the presidential candidate that PDP in the South West will work as a united front towards ensuring victory for the party in all the elections come 2023.

The Governor of Sokoto State Aminu Waziri Tambuwal who accompanied Atiku to the program applauded and congratulated the region, for fighting hard to deliver Osun State to PDP. From the number of party faithful he saw at the interactive session, Tambuwal expressed confidence that the South West will deliver PDP in the forthcoming general elections.

The Sokoto State Governor warned against those promoting same faith tickets in a plural state like Nigeria and cautioned against those that are causing divisions in the country and promised that at the right time, Nigerians will respond with their votes. He assured the stakeholders that the former Vice President is the man who will rescue the country and bring prosperity for all and therefore; charged the South West to remain steadfast and united in the task ahead.

The Vice Presidential Candidate Governor Ifeanyi Okowa of Delta State expressed his joy for the rousing welcome given to Atiku and his entourage in Ibadan and assured the entire South West that Atiku is the only candidate who has a blueprint on how to rescue Nigeria.

He expressed gratitude for the show of love and thanked them for their preparedness in the task of rescuing the country. Governor Okowa told the gathering that Atiku is the only man who has what it takes to rebuild Nigeria and working with him as his deputy and with the support of all the leaders of the party in the country, the rebuilding process that will return Nigeria on the pathway of hope had indeed commenced.

He charged them to study the Atiku blueprint and get equipped with enough information that will enable us to go into the elections prepared as a united family in order to win all the seats for PDP in the 2023 general elections.

In his response, the Presidential candidate Atiku Abubakar, expressed joy and happiness for the rousing welcome at Ibadan. Atiku recalled what happened in 2003 general elections where as the leader of the PDP national campaign team, he took over all the States in the South West, except Lagos. Giving credence to the new electoral act, Atiku warned that the era of ballot snatching and result writings are over in Nigeria.

He therefore charged the party faithful to go out and canvas for votes in all the polling units, wards and local governments, assuring them that PDP can reclaim the South West region if the stakeholders do the right thing.

The former Vice President mentioned that PDP is the oldest party in Nigeria and therefore understands the importance of unity in a political party and also assured the region of his respect for the party constitution.

Atiku responded to some of the issues raised by Governor Makinde and stated that being a foundation member of the PDP, he understands that divergent views should be guided by the constitution of the party.

The Presidential Candidate stated that what should now be paramount to every party stakeholder is on how to win the forthcoming general elections for PDP.

The former Vice President equally expressed gratitude to the stakeholders of the party in the South West for reclaiming Osun and Oyo States and looks forward to coming back during the campaign season to collectively work together with them as a team, in their bid towards returning the entire region back to the PDP.