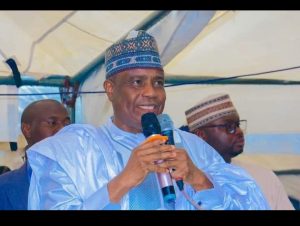 The Governor of Sokoto State, Aminu Tambuwal, has predicted that the Peoples Democratic Party will take over the six states of the South-West in the 2023 elections.

Tambuwal said the victory of the party in Osun State was a prelude to PDP’s bid to take over the entire South-West region.

Tambuwal spoke on Wednesday as the presidential candidate of the Peoples Democratic Party, Alhaji Atiku Abubakar, his running mate , Ifeanyi Okowa, were holding meeting with party stakeholders from the South-West in Ibadan.

Tambuwal said, “What happened in Osun State recently is a sign of what to come. The South-West is going to be delivered to the PDP come 2023.”