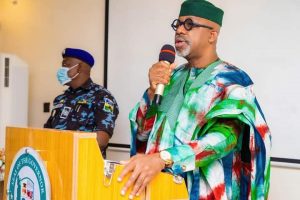 A statement issued by the Governor’s Chief Press Secretary, Kunle Somorin, said Gov. Abiodun made this known during the 2nd edition of the Southwest Secretaries to the State Government’s (SSG) Forum held in Abeokuta, the Ogun state capital.

He noted that the usage of technology had also helped his administration to increase the efficiency and effectiveness of the state’s revenue generating agencies.

“So, we’ve doubled our Internally Generated Revenue without unnecessarily burdening our people, this further underscores the need to continue to utilize technology in public administration,” he said.

Abiodun, while describing the Secretaries to the State Governments of the southwestern states as the engine room of government, added that their roles at implementing the visions, decisions and policies of government had helped in ensuring the development of the zone.

“This kind of meeting can only make for a better cooperation and collaboration among the southwestern states, the SSG’s statutory role is to assist government in the implementation of its vision, policies, decisions and programmes. You are the custodian of the executive council secretariat.

“Today, in the southwest zone, we have financial capital, we are the industrial capital and we are the education capital here. In fact, this is a power-packed zone.

“We must continue to sit and meet to think through what we can do to further be more efficient, to further continue to occupy our pride of place among the zones in the country and to continue to lead the pack,” Abiodun stated.

In his welcome address, the Secretary to the Ogun State Government, Tokunbo Talabi noted the maiden edition which was held on the 2nd of December, 2021, was an eye opener on the dire need for collaboration, cooperation and knowledge sharing among the southwestern tates, especially on cabinet affairs.

He added that it is through synergy among states that the region can regain its economic leadership in the country.

Talabi urged the gathering to not only use the occasion to map out short and long term strategies, but to also look at means of implementing the strategies towards moving the region forward.

He, however, commended the Secretary to the Government of the Federation, Boss Mustapha, for his clarion call on the synergy and efficient service delivery among states, saying it is a call the southwest SSGs can’t wait to embrace.

The Director General of the Development Agenda of Western Nigeria (DAWN), Seye Oyeleye, on his part, noted that Secretaries to the State Government have steered their various states to the path of greater prosperity, adding that the second edition of the meeting is timely because of the evolving nature with the world orchestrated by technology.

Oyeleye added that there is no doubt that embracing technology would improve the quality of service delivery to the public and the quality of life, submitting that the theme, ‘Govtech Reforms in Public Administration’ is built on the need for consolidating the digitalization effort of the Federal Government.