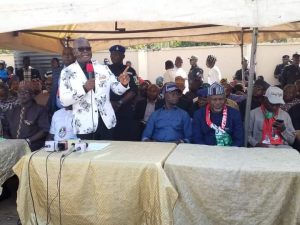 The governor of Benue state, Chief Samuel Ortom has warned the leadership of the People’s Democratic Party against ignoring him, Governor Wike and other aggrieved governors.

The governor of Benue said that ignoring the five aggrieved governors will spell doom for the party in the forthcoming general elections in the country.

Governor Samuel Ortom made this known today in Makurdi while addressing his supporters at the inaguration of the Benue PDP Campaign Council.

According to the governor, no one can guarantee what will happen in Benue state at the next presidential election if the agitations of the five aggrieved governors aren’t addressed.

The governor berated those saying that the five aggrieved governors aren’t critical to PDP’s success at the next general elections, stressing that are are doing a disservice to the party.

His words: “Those who said five governors do not matter are doing the party a disservice. There is no way PDP will win elections with the kind of massive conflict they had especially, with the five Governors we are talking about are those who won elections in their respective States and you think you can ignore them.’’

He called on the national leadership of the party to rise up to the occasion and resolve the issues at stake as it is possible to move forward without addressing the issues the five Governors have raised.

While announcing the donation of 25 campaign vehicles by his Rivers counterpart Nyesome Wike to Benue PDP, the governor also announced that the five aggrieved PDP Governors will be in Benue State next Monday to commission projects.