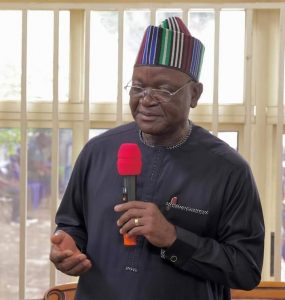 Benue state government has called on security agencies in Nigeria to quickly arrest Miyetti Allah in order to stop banditry in the country.

This plea was contained in a press statement signed by the Special Adviser to Governor Samuel Ortom on Media and Publicity, Mr Terver Akase, in response to a statement credited to the leadership of Miyetti Allah this morning that the governor is profiling them as terrorists.

We read a statement credited to the Fulani socio-cultural group known as Miyetti Allah Kautal Hore in which it accused Benue State Governor Samuel Ortom of profiling Fulanis and confiscating their cattle for auction.

This is not the first time that the group has launched a smear campaign against Governor Ortom. Miyetti Allah groups have marked the Governor, not only for victimization and vilification, but also for elimination. They don’t hide their evil intentions each time they speak about Governor Ortom. The groups have vowed never to obey the Benue State Open Grazing Prohibition and Ranches Establishment Law and have at various times since 2017 taken responsibility for the attacks on Benue people.

Their statement that Governor Ortom has been profiling Fulani, a claim which was in corroboration with comments of the presidential candidate of Peoples Democratic Party, PDP, Atiku Abubakar is not only false but also mischievous. Groups such as Miyetti Allah and Fulani Nationality Movement, FUNAM have never hidden or denied their ethnicity when they issue press statements to threaten peace-loving Nigerians. In most cases, their threats come to pass. If anyone is guilty of profiling the Fulanis, Miyetti Allah and the other groups fit that bill.

Governor Ortom has no personal issues with Fulani. Some of his friends of many years are Fulani, and he also has some appointees of Fulani ethnicity. The Governor is only against the attacks on his people by Fulani who come from neighboring countries such as Niger, Chad, Mali among others. He owes no one apology for choosing to stand with his people in resisting those whose only agenda is to take over and occupy Benue lands.

The Fulani groups consider themselves above the laws of this country. This is why they boldly issue directives, threats and make hostile comments on sensitive national issues believing that the Federal Government or anyone else can do nothing to stop them. Now they are calling for the establishment of a Ministry of Nomadic Affairs. Perhaps their next demand will be for the creation of a Nomadic state where only pastoralists will live.

If the Federal Government is serious about ending banditry in this country, it should order the arrest and prosecution of leaders and members of Miyetti Allah groups. They have questions to answer regarding the armed herdsmen who have taken over the country’s forests and have been attacking innocent Nigerians.

It is pertinent to state once more that no amount of hatred or media attacks can force the repeal of the Benue State Open Grazing Prohibition and Ranches Establishment Law. Anyone who intends to breed animals in the state must do so in compliance with laws of the state.