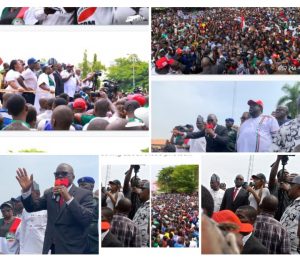 The Benue state governor, Chief Samuel Ortom today received the full support of
the youths and women across the four Local Government Areas of Makurdi, Guma, Gwer East and Gwer West of Benue State over his senatorial ambition.

Governor Samuel Ortom is contesting the 2023 Benue Northwest senatorial election under the platform of the People’s Democratic Party.

The youths and women across the four Local Government Areas of Makurdi, Guma, Gwer East and Gwer West of Benue State pledged their supports to Governor Ortom in a solidarity march today at the Benue People’s House in Makurdi.

The youths and women who converged at the Benue Peoples House, Makurdi pledged their readiness to ensure that Governor Ortom is elected to represent the Benue North-West Senatorial district in the National Assembly.

Leader of the group, Engr Conrad Utaan in his remarks said the MINDA extraction was solidly behind Ortom, emphasising that Governor Ortom was the hope of the people.

In his words, “Your Excellency our Governor and our leader, we have not come here for politics, we have come to tell you that the entire MINDA, Makurdi, Guma, Gwer, Gwer-West and by extension the entire Benue State is 100% behind you. We’ll support you. Your friends are our friends, your enemies will be our enemies. Anybody you support, we shall support, anybody you withdraw support for, we shall also withdraw our own support.

“We want to tell you that if our party the PDP must get it right, they must invite all of you to the table. If they want peace and they want to win elections, you must be on the table. If not, it will be very unfortunate,” Utaan declared amidst shouts of joy from the teeming crowd.

Engr Utaan also condemned the profiling of Governor Ortom by the Presidential candidate of the party, Alhaji Atiku Abubakar, saying, “You are not a hater of Muslims or the Fulani people. You have only said that those who must stay with us must be ready to obey the laws of Benue State and those who are under the law are under your protection.”

Utaan was particularly piqued by the utterances of the presidential candidate of the PDP, who according to him “is supposed to be the Zege Mule U Tiv and should be supporting us. He has not said anything about the killings, he has not come to show support to the flood victims in Benue.”

He went on: “we are not in a war situation in Nigeria, neither is the country under a civil war, so there is no reason why our people should be in the IDP camps for more than 12 years. Currently, we have more than 2 million IDPs.”

He said the federal government must work out a strategic plan to immediately return the displaced communities in Benue State back to their ancestral lands so that they can continue to feed themselves and to feed the nation.

He spoke further, “We want to ask the federal government to extend the hand of support and to protect you because you are the protector of your people. If not for you our leader, the herdsmen would have overrun us and Nigeria. Nigeria has you to be grateful to and if they don’t know, we will tell them.”

Also speaking, Terver Jirgba for Masev and Torkwase Nyikaa for Ihyarev and women in separate remarks all commended Governor Ortom for standing firm to protect Benue people, saying that they would continue to pray and support the Governor to succeed and represent Benue North-West Senatorial district.

Barrister Tijjani Ahmed who spoke on behalf of the Muslim community assured that “the Muslim community in the state have nowhere to go. This is our place and we will support you to go to the National Assembly and Hon Titus Uba will be elected as Governor,” stressing that  “We are against the Fulani herdsmen that are killing our people and we will support and stand with you to protect our people.”

Governor Ortom in his response said as a democratically elected Governor of Benue State he would continue to do the will of the people.

“I am a democratically elected Governor and since democracy is about the people, it is what you people want that I will do. I am encouraged and I want to assure you that by the grace of God, nothing will distract me from standing for the truth.

“I appreciate all of you and I want to assure you that I will never leave you. As your leader, I will continue to support you. That you have shown support to me and I have a duty by the grace of Almighty God and by the powers conferred on me by the almighty God, I will ensure that I support you.

He maintained that “democracy that is not anchored on the rule of law is doomed to fail as it is happening today in Nigeria.

While thanking the youths for their solidarity and support, Governor Ortom assured them that nobody has the power to stop him from going to the Senate except God.

He said “The power of sending me to the Senate belongs to you. It is not any individual. They have no power, they can just say whatever they want but nobody can stop me and by the grace of God I will represent you people in the Senate,” he emphasized.

While urging the people to remain committed to the victory of all PDP candidates in the state,  Ortom said “Nobody should intimidate us, we are matured enough to say our fate and do whatever we want here in Benue State.”