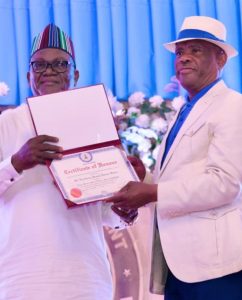 Benue State Governor, Samuel Ortom has charged Nigerians to rise above parochial considerations and work together for the progress of the country.

He stated that at this particular time in the history of the country when it is being challenged economically, socially, politically and security wise, all that was required was for the people to demonstrate patriotism to salvage the country.

The Governor commended the wisdom of Governor Nyesom Wike and the people of Rivers State for showing Nigeria the way by the Award, which brought people across the six geopolitical zones of the country to be honoured.

He said this has demonstrated the belief of Governor Wike and the people of the State in the unity of Nigeria.

According to Governor Ortom, “If every other person in Nigeria will think like Governor Wike, the country will be great and will really take its position as the leader of Africa and the giant of Africa.”

Governor Ortom enjoined the people that as the nation prepare to participate in next year’s general elections, they should not “Look at political parties, nor look at ethnicity but how we can salvage our country Nigeria and make it greater than what it is today”.

The Governor called on the honorees to take the message that has been passed by the Governor and people of Rivers State to their respective states and regions so that the people would appreciate the need to work together for the unity and progress of the country.