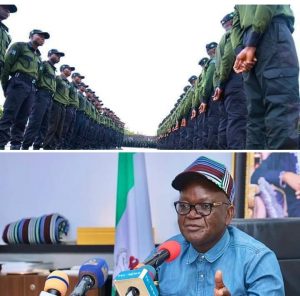 1. The attention of the Benue State Government has been drawn to a sponsored media report by a faceless group identified as Benue Coalition on Human Rights allegedly petitioning the Presidency and security agencies to investigate the activities of the Benue Community Volunteer Guards for being used to hunt political enemies, particularly by the Executive Chairman of Ado Local Government.

2. The State Government wishes to categorically debunk in its entirety, this uninformed allegation, same being false, misleading and a desperate attempt to smear the character and essence of the Benue Community Volunteer Guards, which must be resisted confrontationally.

3. It is trite to state unequivocally that, the Benue State Community Volunteer Guards is a formation of law; the establishment law which began with the approval of the State Security Council and duly passed into law by the Benue State House of Assembly. It was also assented to by the State Governor. The modus operandi of the Guards allows them to assist conventional security agencies in combating criminality as they are not under the control and caprice of local government Chairmen.

4. There is no doubt that some Local Government Areas, particularly Ado Local Government has in recent times suffered a plethora of security challenges leading to the death of many and the destruction of properties worth hundreds of million naira. Most recently and specifically, on the 8th and 9th of November, 2022, over 30 persons were killed in communities within Ado Local Government, a tragedy that prompted all security agencies to undertake a manhunt on the culprits; in the course of which suspects were arrested and handed over to the police.

5. The Government states strongly that, no person can stop security agencies from exercising their constitutional responsibility of investigating criminality. Culpability or innocence can only be established by diligent investigation. Consequently, we state further that, the Benue State Community Volunteer Guards are not under the control of any Local Government and have not in anyway been used to witch-hunt the phantom political enemies as alleged by the brief case human rights group.

6. Those arrested and handed over to the police should cooperate with the police in the course of investigation which will establish their innocence or the contrary. The idea of generating frivolous petitions to blackmail constituted authorities to shield suspects of crime is unacceptable and even the president of the Federal Republic of Nigeria frowns at the brewing security challenges within the country.

8. The identity of the persons arrested in connection with the distateful crime committed in Ado LG does not reveal anything spectacular so as to entitle them to political witch-hunt or enmity. The State Government wishes to state further that, on no account would His Excellency, the Executive Governor of Benue State, Samuel Ortom descend so low as to mastermind the arrest of political opponents or expend state resources for the establishment of the Guards to go after political enemies.

9. The State Government therefore wishes to reaffirm it’s commitment to fighting criminality and will not, under any guise be blackmailed or stampeded into giving a deaf ear to issues of insecurity as they affect the welfare of the people of the State.

10. We wish to also state unequivocally that the Benue State Volunteer Guards are not immuned to the law. If any of them is involved in any infraction, they will be prosecuted by the Police according to the law.