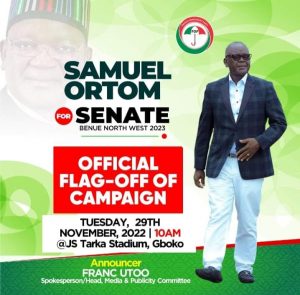 The governor of Benue state and senatorial candidate of the People’s Democratic Party in Benue Northwest senatorial zone, Dr. Samuel Ortom PhD will on Tuesday flag-off his campaigns.

The statement reads in part:

“All members of National and State Assembly, all appointees of the Governor, Local Government Executive Chairmen and their council members, all Leaders and members of Local Government Legislative Councils and all PDP candidates in the 2023 general elections.

“Others include Party elders and stakeholders, women and youths, PDP support groups, singers and other entertainers and members of the press.

“The epoch-making event is scheduled to hold as follows:

Don’t miss out, as we collectively support His Excellency to take a giant leap forward to the Red Chamber”