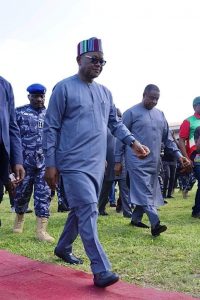 Benue State Governor, Chief Samuel Ortom, says he hasn’t committed any offence that will make the state lawmakers consider his impeachment as being called for by the All Progressive Congress.

Recall that the embattled State Publicity Secretary of the All Progressive Congress in Benue state, Mr.
Dan-Morgan Ihomun, called for the impeachment of the governor.

Meanwhile, investigation by Nigerian Concord Newspaper showed that the call for Governor Ortom’s impeachment is to distract him from fighting against fulani herdsmen and poor governance of APC in Nigeria.

Nigerian Concord Newspaper gathered that the Benue APC is threatened with the governor’s achievements in the areas of security, infrastructure, education, health, agriculture and investment.

“They feel that these achievements will give a big chance to the PDP in the 2023 general elections at all levels in Benue so they want to see how he can be impeached or distracted like they tried in 2018 but failed.

“They believe that once the man is impeached, then the fulani will have the chance to take over Benue lands as they have always wished. They hate the anti open grazing law and that is why you see them call for his impeachment. They tried the same thing in 2018 and failed. They will also fail this time around” a credible source told Nigerian Concord during an independent investigation last night.

However, Governor Samuel Ortom who spoke yesterday at Akume Atongo Stadium, Katsina-Ala Local Government during the decamping ceremony of the Member representing Katsina-Ala East Constituency at the Benue State House of Assembly, Jacob Orban and his followers from APC into the Peoples Democratic Party (PDP) dismissed the call for his impeachment, stating that the APC is just trying to use the threat to divert attention from their internal problem.

His words: “There is nothing like impeachment. What they are saying is just to divert attention from the problems they have. How can you impeach a governor like me? They cannot. APC is pained because of the massive defections of their members into the PDP. Their ranks is being depleted. They are angry, that was why they are bringing the diversionary tactics. They know that before the general elections, there would not be APC in the state. Why wouldn’t they call for my impeachment.

“Have they not tried impeachment before. Did they succeed? No, they did not succeed. They have always wanted me to be impeached. But look, Benue People are with me. How can one have three (3) senators, eight (8) members of House of Representatives out of eleven (11) members, twenty six (26) members of House of Assembly out of 30 and governor, with all the local government Chairmen and councilors from PDP, and somebody is calling for impeachment?”

Governor Ortom said APC should rather stop the diversionary tactics and fix the federal roads. “Where is the money for the Federal Polytechnic, Wannune. APC has nothing to offer. The party in the state could not even conduct a transparent primary election. They are not serious people and therefore, Benue people will not take them serious,” he added.

“The party is not a threat to the Peoples Democratic Party. As far as I am concerned, they do not even have a governorship candidate not to talk of running mate. We are good to go and by the grace of God we will continue to stand with our people and do what they want. We are ready to welcome the remaining APC House of Assembly members as soon they are ready to join us,” he said.

…..Akase asks APC to prove their allegations against Ortom

We read the text of a press conference addressed by the All Progressives Congress, APC publicity secretary in Benue State where he attempted to divert attention from the concerns, fears and focus of Benue people and other Nigerians on the disturbing matters of insecurity occasioned by the failure of the Federal Government which Governor Samuel Ortom has constantly been speaking about.

The lame distraction by APC in Benue State was expected. The man who read the press conference address was only echoing the statements of the leader of the party in the state, Senator George Akume, who is under intense pressure from the Presidency to sustain the campaign of calumny against Governor Ortom. Recall that in 2018, the APC leader, using only eight out of 30 members of the Benue State House of Assembly, sponsored an impeachment move to remove the Governor after he had dumped the party and chose to stand with Benue people in the face of repeated attacks on the state by herdsmen.

We are aware that the APC press conference in Makurdi today was a ridiculous response to Governor Ortom’s recent call for the impeachment of President Muhammadu Buhari on account of his inability to lead the country.

Their outing was also an attempt to divert attention from the plethora of problems facing the APC in Benue State arising from their yahoo yahoo primary elections which aftermath is the court cases instituted by aspirants of the party, as well as their deepening crisis over the choice of a deputy governorship candidate. APC is in shambles in Benue State and the only way for them to breath is to launch media attacks on Governor Ortom. An attack on the Governor earns them instant ‘commendation’ from the Villa.

We expected APC to address the confusion within their party and not raise infantile allegations over local government administration. A party that thrives on imposition and marginalization while abhorring justice and equity lacks the moral standing to question anyone on accountability.

Our response to APC’s allegation that Governor Ortom has been mismanaging local government funds is simply that he who accuses should provide proof. We challenge APC to publish evidence to back their claim that the Governor has turned local governments to his private use and has been diverting funds meant for the councils. They should spare Benue people of the stress in searching for the proof.

It is on record that in the last seven years, under the Ortom administration, three different local government elections have been conducted and three sets of council chairmen duly elected. The APC should be worried that it was unable to field candidates for the last local government election in Benue. How was Governor Ortom responsible for the party’s failure to present candidates for the council polls?

It can be confirmed that Governor Ortom has ensured that leaders of the Nigeria Union of Local Government Employees, NULGE, the Nigeria Union of Teachers, NUT and several labour unions, as well as the association of local government councilors are members of the Joint Account Allocation Committee in Benue State. The unions know precisely how local government funds are administered.

APC in Benue State has every reason to be desperate owing to the mass defection of its members into the Peoples Democratic Party, PDP as the 2023 elections draw closer. A party which suffered a devastating defeat in 2019 and is now facing another defeat in 2023 has justification for distress. The pain of the impending defeat of APC is inevitably similar to circumcision. The cry of a baby does not stop it.

Governor Samuel Ortom remains committed to serving his people and standing with them. He will neither be discouraged nor distracted by the sponsored media assault.