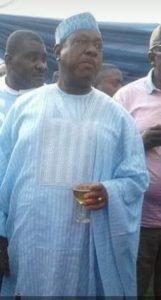 As lovers of democracy and good governance, we are deeply saddened and disturbed by the wickedness of the Minister of Special Duties and Intergovernmental Affairs, Senator George Akume. Why does this man hate Benue State with so much venom?

We have it on good authority that the contract for the road from Makurdi to Gboko, and Gboko to Katsina-Ala was given to Akume. The condition of that road is an eyesore as we speak. The part that leads from Yandev junction in Gboko to Katsina-Ala is the worst road in Nigeria at present. If you use your vehicle on that road, you must take the car for thorough service.

Akume is said to have diverted the contract funds to his private pocket and the road project has been abandoned. Remember that the Makurdi-Gboko-Katsina-Ala Road (Yandev-Katsina-Ala Section) was among the 10 roads across the country that the Federal Executive Council approved and awarded contracts for construction in May 2019. The 10 roads were awarded for the aggregate sum of N169.74 billion. Akume was given the job of the road in his home state. Others who got similar road contracts in their states have since completed and delivered successfully.

As far as Akume is concerned, everything is about himself. The choice of APC governorship candidate was for his selfish interest; the choice of running mate was his relation. His wife Regina is the APC House of Reps candidate for Gboko/Tarka. What a self-centred and greedy man!

We call on the Economic and Financial Crimes Commission, EFCC to commence the investigation of Sen. Akume immediately. Our people are suffering on the Makurdi-Katsina-Ala road all because of Akume. He should be made to explain why the contract was abandoned after funds were released for the job.

The fraud called Federal Polytechnic Wannune must also be investigated. The Federal Government released N2 billion as a take-off grant for the Polytechnic. However, nothing has been done on the site apart from the billboard erected by the roadside. Reports have it that Akume has used the N2 billion to compensate himself for losing the 2019 election. This means that he gave his people a Greek gift.

Senator Akume is one man who has benefited from Benue State more than any other person since the return of democracy in 1999. Akume was elected by the people as Governor for two terms; later became a Senator representing Benue South West for 12 years and is now a Minister representing the state in the Federal Executive Council. Yet, all that he has given back to the state is hatred. How ungrateful can a man be to his home state!

As concerned indigenes of Benue State, we wonder what wrong we have done to Akume that he has chosen to pay us for all our love with deep hatred! He was in the Senate from 2007 till 2019 when he used his own hands and mouth to evict himself from the senate by conspiring with our enemies to cause more pain on our people. Fulani herdsmen put hundreds to the sword but Akume went on national television to say that Benue people were killing themselves. So when the time for the election came in 2019, the people decided to give him the real red card!

As a senator, Akume did not move a single motion or sponsored just one bill in 12 years. His “stewardship” in the red chamber was all about local politics when his colleagues were busy making big decisions on the national stage. He has continued with such a local mentality even now that he is a minister.

We expect EFCC to begin the probe of Akume within the next one week to demand explanations on the Makurdi – Katsina-Ala road contract and the Federal Polytechnic, Wannune.