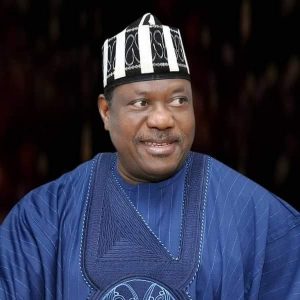 The crisis rocking the Benue state chapter of the All Progressive Congress, APC, has taken another dimension as stakeholders and elders of the party across the three senatorial zones of the state have decided to pass a vote of no confidence on the leadership of the minister for special duties and intergovernmental affairs, Senator George Akume.

This is just as the state chairman of the party is presently facing threats of being suspended by the national leadership of the party for misleading the public that the placeholder for deputy governorship slot of the party, Barrister Shima Vambe, had withdrawn for a former Minister of state for Niger Delta, Hon. Samuel Ode.

Akume’s sins are that he had forced an unpopular candidate, Reverend Father Alia, on the party as her governorship candidate and is also making efforts to impose his political godson and nephew on the party as Alia’s running mate

According to a very impeccable source, Senator Ameh Ebute who was senate president during the end of the Third Republic met this evening with other Benue APC stakeholder including Chief Johnson Agada and Mr. Abba Yaro on how to form a formidable voice that will enable them to remove Senator George Akume as the leader of the party in the state.

The source, an Aide to Ebute who preferred not to be mentioned said that the pronouncement to take the leadership of the party from Akume will take place in a stakeholders meeting which the party will be hosting in Makurdi next week.

The source also confirmed that Senator Ebute and his co- agitators have secured the support of the national chairman of the party, Senator Abdulahi Adamu, to remove Akume as the leader of the party in Benue state.

Adamu, according to the source has also started making plans to suspend the state chairman of the party, Austin Agada, so as to pave way for Ebute to take over the leadership of the party from Akume.

It was gathered that Adamu is particular angry with Agada for telling him lies about the position of things in the party in Benue state. “The national chairman is angry that Agada has been telling him that everything was under control back home whereas the crisis hitting the party here is more than a world war” our source said.

The source also said: “We are only afraid that our party may not have a candidate in the next governorship election. Too many cases are in court and Akume caused it all with his evil manipulation and high-handedness. The only solution is to get him out of the way, and our leaders across the state have met and will be passing a vote of no confidence on his leadership.

“The national chairman is in support of this as he has been briefed on the plans to take away the party’s leadership from Akume. The state chairman too will have his days with the devil soon as the national chairman has accused him of being part of those causing troubles in Benue APC.

“The demand of these aggrieved elders is simple. They want to be allowed by Akume to choose a running mate for Alia since it is their zone that is producing deputy governor but Akume isn’t allowing that. He, Simeon Shango and Gyado (Tilley) have conspired together to impose someone that isn’t acceptable by the stakeholders of Benue South as the party’s deputy governorship candidate.

“To perfect his evil plot against the people of Benue South, Akume had been using Austin Agada to sell lies to the people in Abuja that everything is in order even when it is clear that the crisis rocking the party over the choice of Alia may not be resolved till the general elections.

It has been gathered that the placeholder, Shima Vembe, has demanded N100 million as compensation for him to withdraw from the position for Hon. Samuel Ode or any proposed running mate at all.

According to findings, Adamu is being disturbed that Akume is giving Agada the nerves to issue a letter to submit a candidate instead of the national secretariat of the party that has the right to do so.