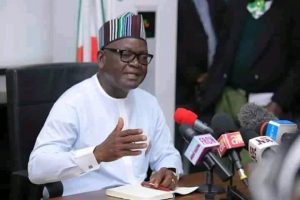 Following condemnation by some groups over the non-inclusion of his name in the recent national awards given to some Nigerians by the federal government, Benue state governor, Chief Samuel Ortom said he is focused on serving his subjects.

This is just as the governor appreciated the people as well as the groups that are calling for his inclusion on the Honour list.

Speaking through his Special Adviser on Media and Publicity, Mr Terver Akase, the Benue state governor made it known that it’s his wish to ensure that his people enjoy dividends of democracy to the fullest as promised in his electioneering campaigns.

The statement reads in parts:

“Benue State Governor, Samuel Ortom says while he deeply appreciates the call by the group known as Movement for Good Governance and Democracy, as well as other Nigerians who have expressed concerns that he should have been on the list of those recently given national awards by President Muhammadu Buhari, his focus is on serving the people of the state.

“Governor Ortom is satisfied with the honour and constant support Benue people have given him to succeed since 2015.

“He appeals to the concerned individuals and groups not to make an issue out of the awards but rather pray for him to continue to play his role of serving Benue State and the country.

“The Governor remains grateful to Almighty God for the grace to lead the state and also be able to make contributions towards nation-building.

“He congratulates all recipients of the National Honours Awards and urges them to sustain their selfless services to the country.”