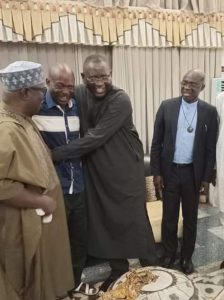 The Benue state chapter of All Progressive Congress has finally collapsed as a chieftain of the party in the Southern part of the state, Alhaji Usman Abubakar also known as Young Alhaji, rejected the choice of Samuel Ode as the running mate to the disputed governorship candidate of the party, Reverend Father Hyacinth Alia.

The disgraceful event in the life of the Benue state APC took place yesterday at the Otukpo residence of Young Alhaji when Reverend Alia and some party leaders including the state chairman of the party, Austin Agada took Samuel Ode to him for unveiling as the deputy governorship candidate for the 2023 election.

Sources at the meeting which ended up on a sad note told Nigerian Concord Newspaper that Young Alhaji who shunned the Thanksgiving service and reception held in honour of Samuel Ode told Alia and other party leaders present that he would never support an Otukpo man to be deputy governor.

According to him, it is the turn of Apa/Agatu people to produce the next deputy governor of Benue state since Otupko is just rounding up its eight years tenure in the same post.

Despite praises showered on Young Alhaji by Samuel Ode, the Ogbadibo-born politician was said to have maintained his earlier stand that he would not be part of the APC campaign council.

The visibly angry Young Alhaji also blasted the minister for special duties and intergovernmental affairs, Senator George Akume for forcing his brother on the party as deputy governorship candidate despite the fact that it is not the turn of Otukpo to produce someone for the seat again.

His words: “I wish Senator Akume is here so that I can say it to his face directly. I stand with my earlier decision withdrawing my support for our party, APC. We the Idomas don’t joke with zoning, Otukpo is just rounding up it’s 8 years as the occupant of the number 2 seat.

“Apa/Agatu is the next political bloc in Zone C to produce the next deputy governor in 2023. Sam Ode, you know you were imposed by Senator George Akume against the collective decision of our people, therefore you won’t get our support. You can see that no party leader from the zone attended your unveiling, thanksgiving and reception”