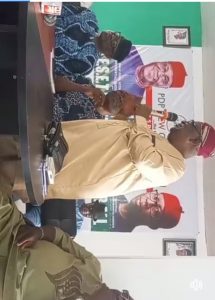 He chairman of the Ondo state PDP Presidential Campaign Council, Ambassador Roland Omowa, the vice chairman, Mr. Eyitayo Jegede SAN and the Director of the Campaign Council, Dr. Eddy Olafeso have charged voters to reject the All Progressive Congress in 2023.

They all spoke today at the Ondo state PDP Banquet hall, venue of the formal inauguration of 530 members of the Presidential Campaign Council.

In his speech, Omowa called for a decisive action from voters which is to ensure that they all vote against all the candidates of the All Progressive Congress in the forthcoming general elections in Ondo state.

According to him, the leadership of the campaign council is up to the task to secure victory for the party in all the 2023 elections.

“I am confident that we can do it. And by the grace of God, we will do it. Today is not for a long speech. Let me thank all of you for coming, I know by the special grace of God, Atiku will emerge the President of Nigeria come 2023,” Omowa stressed.

Also speaking, Vice Chairman of the Ondo PDP Presidential Campaign Council, Mr. Eyitayo Jegede SAN condemned the high cost of living in Nigeria, urging voters to vote for Alhaji Atiku Abubakar and other PDP candidates in Ondo state so they can restore a good living they were enjoying before under the PDP’s administration.

According to him, the hardship which Nigerians are facing under the APC-led federal government is too much, stressing that it’s only PDP that can stop the poverty.

Jegede urged members of the party to remain united and shun any act that can divide the party at this crucial stage, noting that it’s in unity that the elections can be won for the party.

According to him, PDP is larger than any individual. He said despite that some members had left the party, it still remains as an institution that cannot be disbanded.

He pleaded with members to ensure victory from the State assembly election, House of Representatives, Senate to the presidential election so that the party can return to power both at the center and in Ondo state.

He urged all members of the party to return back to their various Units and begin to canvass heavily for the party.

He said the party delivered Ondo state for Atiku in 2019, noting that the same will be done in 2023.

Earlier in his remarks, Dr. Eddy Olafeso
expressed hope that Alhaji Abubakar Atiku will become the president of the country in 2023 with the quality of the men and women selected to lead the campaigns in Ondo state.

His words: “I recognize all the leaders here present. For me, there is no job too small to do for the party that you belong to and for us to do anything that would rescue Nigeria from what it is today. The 2023 election that will produce the president and other candidates of the party is a must-win election because of the fate of our nation.

“In the last 15 years, the arrowhead of this struggle is Waziri Atiku Abubakar who has dedicated his life to fighting for the improvement and betterment of Nigerian society.

“I have known him for the past 25 years through Chris Mamah who worked with him when he was the Vice President of the Federal Republic of Nigeria. Atiku excites me, the man raised himself and made himself relevant to society. Atiku dedicates himself to the betterment of society and that is why we must all join him to rescue Nigeria.

“For those who are not here, we must all take this message home to work together and produce Atiku as the president of this country and elect all the senators, members of the house of representatives and other candidates of the party. Yes, we can, together rescue Nigeria.

“There is no part of any sector in Nigeria that has not been destroyed. They have stolen everything that can make Nigeria have a better tomorrow. All our oil has been stolen away by the APC to China. They have done everything to ruin this country.

“Atiku is the only man that can stand between them and rescue this country. I believe in the man that we have picked as our candidate and that is why we must embrace one another to do this job. It is only good governance that could be led by Atiku Abubakar that can bring all our dreams in Nigeria to reality.

“Ondo State produced the largest votes in the southwest in 2019 for Atiku and this time, again, we can. If you all believe this, please rise for Atiku himself,” the oratory Olafeso said.

In his inaugural speech, the State chairman of the Party, Hon. Fatai Adams said the committee members must work hard and smartly in ensuring the party’s victory in the 2023 election.

“Members of this campaign council have a common goal which is “operation win your unit”. Every member must deliver their units for the PDP. I congratulate all members of the committee who made the list. We will distribute letters to all the worthy nominees senatorial district by senatorial district and I urge all the members to work together in ensuring the party’s victory in the 2023 election,” he said.