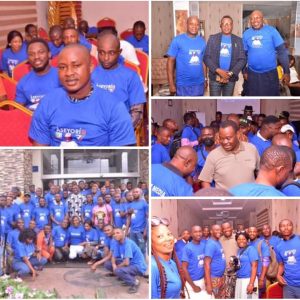 The 10th Senate of the Federal Republic of Nigeria (June 2023 to May 2027) is coming as a milestone in the history of Democratic Governance and Legislation in Nigeria since independence in 1960.

The quality of men and women expected to occupy the distingushed 109 seats of the Red Chambers are very high, judging by the outcome of the just concluded primaries of the two main political parties, the APC and PDP. Both parties have produced candidates that worth their names, who are leading lights in politics, business world, academics, professional bodies and new order of developmental strategies.

So, for any District or Federal Constituency to excel and get most of it desires from the Federal Government; it must elect a formidable, well educated, well granted and widely connected candidate as Senator or House of Reps member who can compete well and boldly canvass and lobby other Senators.

For Ondo South Senatorial District of Ondo State, and with the backlogs of infrastructure deficiencies and protracted power outage in four local government areas of the district; the need to vote for a bold, vocal and well connected candidate as the Senator of the 10th Senate is very germane as the only option and solution to our perennial socio-economic problems.

This is the reason a personality of Dr. Jimoh Ibrahim, CFR, the candidate of All Progressives Congress, APC is unarguably, the most preferred choice as Senator comes June 2023.

In demonstration of his capacity to bring fresh and scientific innovations and paradigm shift to people’s representation at the Red Chambers of the National Assembly, the well lettered technocrat and business mogul gathered 63 vibrant and well educated youths, majority drawn from the Southern Senatorial District of Ondo State, for a 2-Day strategic leadership training programme with the main purpose of roadmapping and upgrading their knowledge base towards effective leadership, enhancement and globalisation of educational qualifications with world best rated Universities and citadel of learning, such as University of London, Oxford University and University of Cambridge, all in United Kingdom, UK.

Dr. Jimoh Ibrahim, CFR who recently bagged a PhD in Business from University of Cambridge, with Master degrees from both Oxford and Harvard Universities, told the participants that his recent education attainment globally has catapulted him to the world elites class and a player in global stages of education and business exposure; a development that has already pushed his involvement in politics to the second position.

But for his undying love for the youths and his locality, as a ‘Local Boy’ from Igbotako in Okitipupa local government area of Ondo State, he decided to go to the Senate in 2023 to use the instrument of Government at the Central to bring succour to the people by helping to find solutions to some fundamental problems and challenges.

For instance, Ondo South Senatorial District has been disconnected from the National Electricity Grid for almost two decades without any concrete solution in sight; Dr. Jimoh Ibrahim, CFR believed that only a declaration of State of Emergency on Power in the South by the Senate can bring a permanent solution to the power outage, and not the fire bridge approach of the past as promised by politicians and the likes.

Dr. Jimoh, a billionaire business mogul whose published PhD thesis in University of Cambridge was on Abandoned Megaprojects (Nigeria as case study) noted that about 11, 886 megaprojects with over one trillion dollar contracts sum, spread across Nigeria have been abandoned and many all of the projects without a completion date at sight. Such as; Ajaokuta Steels Rolling, Sure-P, Second Niger Bridge and Lagos- Ibadan Expreeway.

He said the reason why only an emergency proclamation on Power outage in the four local government areas of Ondo South can solve the elrctricity problem, was that the power challenge has become a megaproject that even the Federal Government cannot solve without been declared a state of emergency through a Legislative Bill that will require intervention funding and not fund from the annual budget.

According to him, only the Federal Government can march such huge fund require for a megaproject like fixing the Ondo South electricity problem through Parliamentary Act of declaration of a State of Emergency.

At the seminar branded “Aseyori Roadmap To Strategy Leadership, the APC Senatorial candidate charged participants to make maximum use of the Internet to access world-class Universities and redo their first degrees to globalise their certificates in order to play effectively in global job markets to enable them get life changing, well paid employments with reputable international organisations, including United Nations (UN) and its international agencies across the world.

He warned that the local degrees gotten from Nigerian Universities are not enough for them to play in the very competitive intellectual and educational advanced global job market with ample opportunity to rapidly expand and enhance applicant’s life and transform the total well-being of his or her immediate family members to global citizens.

To be at the top of their games, such as education, marriage, business and finance, Dr. Jimoh Ibrahim, CFR who is the sole facilitator of the two days intensive and knowledge impacting leadership training, told participants to always thrive to be the ‘Red Fish’ that leads a team of swimming fishies in the ocean of life, which could be achieved by engaging in strategic realignment of life challenges to reach to the very top.

In his comments about the Aseyori leadership seminar, one of the participants, Prince Orimisan Taiwo said; “Dr Jimoh Ibrahim (CFR) has created motivational Strategies to face any challenges you met yourself in life. He also established solutions to Nigeria economy problems by addressing what we called Mega Projects and the way out.

“Mainly, I appreciate Dr. Jimoh Ibrahim for impact global Strategies and innovations ideas to Ondo South Senatorial District Youths which will help us in all activities in life and Sponsored the Seminar.”

Another participant, Odofin Oluwafemi, popularly known as C-Banking has this to say; “Ji has long broke away from orthodox way of doing things. He has romance technology and he has made love to wisdom, knowledge and understanding. If we must move forward as a people, we must divorce ourselves from some orthodox and primitive way of thinking.”

He said further; “Playing 15th century politics in 2022 is tantamount to failure. Getting to public office is not a function of the numbers of people you prostrate to greet, or the numbers of leaders you went to visit at midnight when you are supposed to be sleeping. It should be about the people not any greedy politician or political jobbers, they are those whose sources of livelihood depends solely on politics. Ji got to the apogee of this career as a successful business tycoon of high repute, he has first address (job) before jumping into the ocean of politics.

“As a product of this generation, we must as a people develop ourselves mentally and physically for the battle ahead, it’s imperative we join hands to push capable hands (Jimoh) forward to be our torch bearer at the red chamber. We can’t afford to settle for those who are half baked (intellectually). Senate is an assembly of people’s mind where critical nation issues are being raised, discussed and solutions are being proffered by people of high intellectual prowess not mediocre. We shall resist anybody who wants to package incapable hands to represent us. We should get it right this time.”

After the two days thought provoking and capacity building leadership training, all the participants returned to their respective base as changed individuals with a renewed zeal to made it to the top as the ‘Red Fish’ using the instrumentality of education by acquiring University degrees from best rated Universities in England and America.

Henceforth, they promised to spread the news about the leadership qualities, strategy and innovation skills of Dr. Jimoh Ibrahim, CFR to their peers and fellow Southerners to let them know the reasons why the Igbotako born politician must get their votes come February 25, 2023 and be elected as Senator representing the Ondo South Senatorial District.

As his success story in both local and international business, Dr. Jimoh Ibrahim, CFR has an edge over and above his opponents at the poll as a bold and well read Law Graduate from the foremost Obafemi Awolowo University, OAU, Ile-Ife. Masters degree from both Universities of Oxford and Harvard and doctorate degree in Business from University of Cambridge, with many executive programmes completed from Oxford University.

He is also a successful business mogul and billionaire consistently for over two decades in private businesses with substantial interest in Aviation, hospitality, Oil and Gas, Estate Management for over three decades without blemishes and criminal records.

JI as he is fondly called is one of the very few Nigerian successful internationally acclaimed and recognised businessmen who has never been invited by any anti graft agencies in Nigeria or abroad for financial crimes or misdeeds.
He has been a philanthropist, community developer and kind giver since 90s when he gave scholarship to many medical students then, but are successful medical pratictional today.
He singlehandedly use his private resources to build a world-class citadel of learning, comprises of a secondary school and full fledge University of Fortune, FUI, Igbotako.

He delibrately sited the University in Igbotako, his hometown to attract massive development to the locals, instead of highbrow cities where he can quickly recrop his investments.