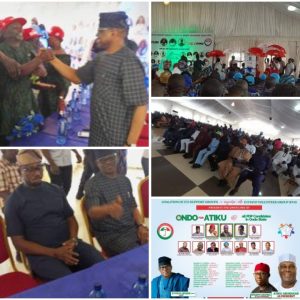 The Coalition of Eyitayo Jegede Support groups today unveiled Ondo for Atiku and all the People’s Democratic Party’s candidates into various offices in Ondo state.

Speaking at the well-attended event which was held at Amazing Grace Event Hall in Akure, former governorship candidate of the party in Ondo state who is also a former Attorney General of the state, Eyitayo Jegede SAN, said it is only the PDP presidential candidate, Alhaji Abubakar Atiku that can rescue Nigeria from its present situation.

He urged voters across Ondo state to ensure that they vote for all the candidates of the party from the president to the Senate, House of Representatives and the State House of Assembly at the general elections, stressing that they will not fail to deliver good governance to them if elected.

Barrister Jegede recalled the achievements which the country recorded during the years of PDP at the national government, noting that all that had been ruined by the close to eight years rule of the All Progressive Congress under President Muhammadu Buhari.

According to the legal luminary, a vote for Atiku is a vote for progress, good governance, secured Nigeria and good economy.

Jegede urged all his support groups to go to their Units, Wards and Local government areas and begin to sensitize voters on the need to vote for Atiku and all the party’s candidates in Ondo state.

He pressed further that Alhaji Abubakar Atiku had been tested as vice president and chairman of the country’s Economic Team under former president Olusegun Obasanjo before, and he didn’t fail the nation.

He said the roles which Atiku played in stabilizing the Nigerian economy under Obasanjo’s regime is enough to show how he will revive the dead economy of the country.

Jegede noted that the former vice president led a remarkable period of sustainable economic growth in Nigeria even though the administration of Olusegun Obasanjo was greeted with financial challenges at the beginning.

In their separate speeches, state chairman of the party, Alhaji Fatai Adams, a former House of Representatives aspirant, Mr. Babatunde Faro, Senator Yele Omogunwa, Barrister Amuwa, a house of representatives candidate from the Northern zone of the state, Hon Sabela and the senatorial candidate of the Ondo North Senatorial Zone who doubled as the chairman of the occasion, Akogun Tokunbo Modupe, all lauded Eyitayo Jegede for being a unifier of the party in Ondo state.

They praised Jegede for making sure that all the party’s candidates as well as the aggrieved camps of the party in the state were brought together for the progress of the party.

They also commended him for the mature way he has been handling the crises that came up after the last primaries in the state in order for the party in Ondo state not to go into the next general elections with a divided home.

They however stated that it is only Atiku’s presidency that can bring development to Nigeria and as well return maximum security back to the country.

They urged all Eyitayo Jegede support groups to go back to their Units and canvass for votes for Atiku and all the party’s candidates in the state.

Also speaking, a former special assistant to late Dr. Olusegun Agagu who is also a prominent chieftain of the People’s Democratic Party in Akure South local government, Hon. Tony Ala, urged everyone to throw their weights behind Atiku Abubakar so as to make it easy for the party to produce the next governor of the state in 2025.

Tony Ala who stormed the event with party leaders like Honourable Dele Faboro, Hon. Tayo Egunjobi and a host of others specifically mentioned Barrister Eyitayo Jegede SAN as the preferred choice for the next governorship, urging everyone to rally round him to succeed in 2025.

In her remarks, Hon. Remi Mohmoh, Ondo state coordinator of Ward to Ward for Atiku, said that the presidential candidate being a unifier wouldn’t be carried away with tribal or religion sentiment owing to the fact that his wife is from Yoruba and also she is a Christian.

Mrs Remi Mohmoh who was flanked by members of the group like Hon. Kehinde Omoniyi, Revrd. Tayo Abisola, Mrs Oladunmoye, Mrs Kokumo Johnson, Seun Adanri, Dare Fagun, Olu Adebayo, Blessing Oloworibi, Mr. Olosu, Kunle Fayeun, Mrs Sidi and a host of others however pledged the support of her support group (Ward to Ward) to Alhaji Abubakar Atiku and all the candidates in the state, saying that the party needs every support to come out victorious at the general elections next year.