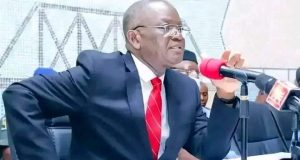 The Benue state chapter of the People’s Democratic Party has tackled the state All Progressive Congress for making plethora accusations against Governor Samuel Ortom.

This was contained in a press statement signed by the state publicity Secretary of the PDP, Mr. Bemgba Iortyom.

We read in the news a statement from the All Progressives Congress (APC) in Benue State in which they levelled a plethora of accusations against Governor Samuel Ortom regarding the performance of his administration.

At the heart of the statement lie the accusations that the governor has abandoned his primary responsibilities of governance for national politics, with salaries and pensions left unpaid,, flood victims neglected, and sanitation in the state capital city, Makurdi in poor condition.

But the statement only resonates the predictable plot by APC at the federal level, where possible, to scuttle the developmental efforts of the Ortom administration, thereby creating capital for the politically malnourished local chapter of the party in Benue.

Only recently the opposition party in the state was thrown into jubilation over the federal government having blocked a N41 billion loan application approved by the Benue House of Assembly with which the State Government sought to clear backlog of salaries and pensions arrears.

The loan application was predicated on the reality that shortfalls in accruals from both statutory federal allocations and internally generated revenues have inhibited smooth payment of monthly wages as well as pensions by the Ortom administration, much of which are backlogs from the past.

However, other states had similar such approvals passed which are known to be in the good books of the APC controlled federal government, driven more by mundane partisan inclinations than by patriotic duty to all component parts of the country under its governing authority.

Yet the Ortom administration is on record to have cleared about half of the pensions arrears to retirees it inherited from past administrations, while being diligent in its payment of monthly wages to workers, most notably from 2018 when it came under the control of our great party, the Peoples Democratic Party (PDP).

Today, same opposition APC seeks cheaply to weaponise the issue of salaries and pensions against Governor Ortom which their party at the federal level utilises in cruel play of negative politics by blocking access to funds with which to offset those backlogs.

On floods Benue APC falls below-par in its worldview by insinuating blame on the governor when the occurrence is ravaging different parts of the country almost daily as a result of heavy rainfall, yet the opposition party shamelessly seeks to ekk political capital from it by accusing the governor of lack of empathy for having not yet visited affected areas.

Yet Governor Ortom is known for his closeness and empathy with his people whom he has always stood with in challenging times, such as through the insecurity brought upon them by APC’s acquiescence with herdsmen, bandits and terrorists.

The State Emergency Management Agency (SEMA) may not have reached out to victims of floods in the state, obviously due to the fact of logistics, yet the Agency by its known antecedents will surely perform its duty to those victims and timeously too.

It is also unrealistic the expectation by Benue APC that cleanliness levels in Makurdi should be spick and pan when flooding is an almost daily occurrence with its attendant blockages of drainages and littering of debris across the city, yet the Benue State Environmental Sanitation Agency (BENSESA) is doing its job under those unusual circumstances to keep hygiene and sanitation levels at acceptable standards.

We are aware the towering national profile of Governor Ortom in PDP contrasts sharply with the diminutive stature of APC’s own supposed national leaders who are in reality inconsequential expendable pawns in the party’s national affairs, so their derogatory references to the governor’s relationship with his friend and ally, Governor Nyesom Wike of Rivers State, is excusable on grounds of envy mixed with ignorance.

Governor Samuel Ortom under the guiding control of PDP, remains more than ever committed to the security, peace and wellbeing of the Benue man, woman and child, and no amount of sabotage and blackmail by APC will distract him from that commitment.