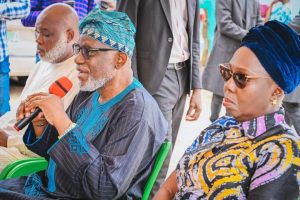 The Oniju of Iju-odo, Oba Festus Olumoyegun; the Organised Labour in Ondo State; Local Government Vice Chairmen; Senatorial candidate of the APC In Ondo Central Senatorial district, Niyi Adegbonmire (SAN); and Mr. Diran Iyantan were among the early callers at the Kopindogba residence of the Late Lady Evangelist Akeredolu on Saturday.

They were received by Governor Akeredolu, his wife, Chief Betty Anyanwu-Akeredolu, and siblings.

Oba Olumoyegun described the deceased as an achiever who witnessed the successes of her children before passing on to eternal glory.

He promised to support the Governor in giving his mother a befitting burial.

The Chairman of the Nigeria Labour Congress (NLC) in Ondo State, Comrade Sunday Oluwole Adeleye, who led the delegation of Organised Labour, congratulated the Governor for surviving his mother.

Governor Akeredolu appreciated the monarch and the organised Labour for finding time to pay him a condolence visit.

The Governor described his late mother as a prayer warrior who served God wholeheartedly in her lifetime.