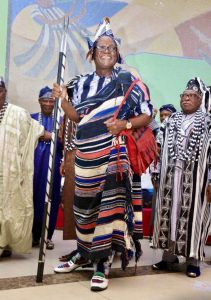 The traditional rulers who are from Guma, Gwer East, Gwer West and Makurdi local government areas, which make up MINDA stated this when they paid the Governor a solidarity visit on Monday, August 29th, 2022 at the Benue Peoples House, Makurdi.

They said they were proud of what Governor Ortom has been doing to address the challenges of the state in all sectors.

Tor Lobi, His Royal Highness, Chief Moses Anagende in his opening remarks stated that Governor Ortom as their son have their mandate and has continued to impress them in his governance approach.

He acknowledged that Governor Ortom has demonstrated unrelenting passion to tackle security issues in the state, pointing out that he has also ensured rural development.

The royal father appealed to the Governor to intervene in boundary and land dispute issues between the four local governments and their neighboring communities, emphasising the encroachment on Ugondo land by the Nigerian Air Force authorities in Makurdi.

While thanking the Governor for siting development projects in the area, Chief Anagende urged the Governor to endeavour to complete all ongoing road projects within the axis before the expiration of his administration.

The Ter Gwer, His Royal Highness, Chief Dominic Akpe in his remarks noted that Governor Ortom has prioritized the welfare of traditional rulers.

Governor Ortom in his response, said the solidarity visit by the traditional rulers have rekindled confidence in him to remain ever committed to serving the people.

He thanked the royal fathers for the encouragement and  pledged to never do anything without their consent, saying with their support and prayers, the security problems confronting the state will be tackled.

The Governor who expressed displeasure over the lingering land and boundary dispute issues promised to once again intervene in the matter for a solution.

He directed his Chief of Staff to provide motorcycles to all district heads in the state to enhance movement for local errands within their respective domains.