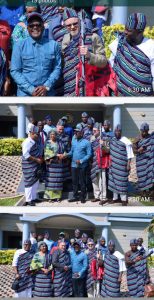 Benue State Government is to benefit from an agricultural programme on Innovative Strengthening of Smallholder Farmer and Productive Land Restoration.

The programme is to be implemented by the African Union Development Agency’s New Partnership for Africa’s Development, AUDA-NEPAD in collaboration with the State Government and other private investors.

The National Coordinator and Chief Executive Officer of AUDA-NEPAD Nigeria, Princess Gloria Akobundu disclosed this Thursday, December 1st, 2022 when she led a delegation to pay a courtesy call on Governor Samuel Ortom at the Benue Peoples House, Makurdi.

According to the AUDA-NEPAD National Coordinator, the programme is targeted at land restoration for agriculture to boost food security, factoring climate change initiatives.

She maintained that “Benue State as we know, is the food basket of the nation, so in implementing this project, Benue is one of the key states because of what is known for.”

She pointed out that partnership with the state and working investors and the people will bring “a revolution of development and economic growth.”

The National Coordinator stated that she was proud of the State Government for the partnership and its commitment towards ensuring the realization of this project, stating that “our investors are happy and willing to commence their projects immediately.”

She pointed out that the programme, when implemented, will add value to the economy, job creation and guarantee food sufficiency in line with African Union Agenda 2063 on Zero Hunger.

She lauded Governor Ortom’s Government’s preparedness in the areas of land development and budgetary commitment for the project as well as submission of the required data on smallholder farmers, composition of technical team among others.

Dr Mernard of Spades focused on environmental protection and land restoration, emphasising that “climate change is a growing disaster in the entire world” which he reasoned must be tackled to secure agricultural production.

He pointed out that his company would facilitate forest investments by building afforestation capacity, restoration of degraded lands, mangrove restoration, protection of nature reserves amongst others.

“No nation can do it alone, we all have to come together, and what it means is that, there is a strong reason for large investments to come to developing nations and to restore soil, improve food security” adding that there is a large opportunity for everyone.

On his part Mr Wexler said to enhance sustainable development for the smallholder farmers in the state, his company would invest in areas providing resources in education, training and soil amendment as well as the required knowledge to get proper agricultural production through climate smart agriculture and soil restoration.

Governor Ortom in his remarks thanked the AUDA-NEPAD team for choosing Benue as a pilot state for the project, stating that the programme has come at the right time.

He said, “This programme is very key, and I cherish and appreciate it. I want to assure you that my Government will support you full-time. We are ready to do partnership, all that we need with our technical team in place let us know what we need to do, to be on top of it.”

The Governor expressed happiness that the programme will engage the smallholder farmers and provide support to them, describing it as a win-win initiative.

Governor Ortom maintained that even though Nigeria had enormous potentials in agriculture, “we have not been able to tap the potentials to boost the economy,” stressing that “processing has been a very major challenge but, we can turn it into a gold mine and attract investors, because not many people are into it.”

According to the Governor, “Investing in processing will give our people the opportunity of adding value to the economy, to engage them and reduce the rate of insecurity in our country.”