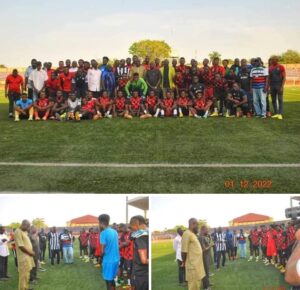 Benue state government has lauded the management of Lobi Star for the efforts to reposition the state-owned football club.

The commendation was made by the State Commissioner for Youths and Sports, Barr. Teryima Nguher on Thursday when he visited to inspect the playing turf of Aper Aku Stadium Makurdi.

The commissioner who was conducted round the astral turf playing pitch by the Vice Chairman/CEO of Lobi Stars Football Club, Mr. Dominic Iorfa used the opportunity to watch Players of Lobi Stars in training session.

Addressing the players, Barr Nguher charged them to be discipline on and off the pitch, so that they would go higher height in football.

The essence of the commissioner’s visit was to ascertain the nature of the pitch and other vital facilities within the stadium complex which have been dilapidated for quick decision making that would keep the stadium in shape ahead of the new season.

Recall that, the Interim Management Committee (IMC) during their tour round the country, marked Aper Aku stadium, as one among those that have been affected due to lack of adequate facilities.

The affected facilities includes: electronic score board, a standard dressing room for both home and away teams, floodlights, VIP State box and playing turf.

The Sports Commissioner after inspecting the stadium, disclosed that, he has received a letter from the league authorities few days ago on the ban, and assured of reporting to his principal, Governor Samuel Ortom for the best alternative.

The new season according to speculations, may likely start within second to third week of December, 2022. Lobi Stars may be forced to play away from home if the desired result is not achieved before the kick start of the league.