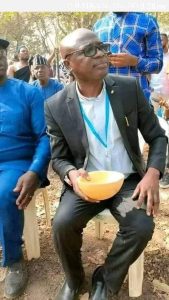 The corrupt acts, lies, pacts with Fulani herdsmen who are generally considered the enemies of the people of Benue as well as the sex escapades of the embattled governorship candidate of the Benue state chapter of All Progressive Congress, Reverend Father Hyacinth Alia has been exposed.

According to the media note, Alia has been meeting secretly with some northern governors and other individuals and groups of Fulani extraction.

“The Fulani people have made a deal with him and are sponsoring him so he can win and give them free access to land in Benue State. Alia eagerly promised them that the first time he will do, if elected, is to repeal the open grazing prohibition and ranches establishment law of the state. He has met with the diminutive Governor of Kaduna State and that of Katsina State on several occasions to perfect the deal. He is on the payroll of the Fulani” the media note says.

The note reads in parts:

“If there is anyone who should not be talking about governing Benue State in 2023, such a person is Hyacinth Alia, the man whose only achievement is conducting fake healing masses and stealing church funds and building materials to build mansions for himself and his many women.

“That man is not a priest. He only used the priesthood to hide and commit atrocities. This is why an old priest like him didn’t have a parish where he was presiding as the priest before he abandoned the work of God to have more time for worldly pleasures.

“Alia is also a very corrupt man. In all the places he served as a priest, there are records of his mismanagement of funds and embezzlement to build mansions for himself and his women”

Describing Alia as a randy priest, the media note says: “In 32 years of being a priest, Alia who is better known as ‘Orhiti’ for his sexual escapades with women, did not build even a toilet for the church. The money that poor parishioners raised through their meager efforts, he squandered it all with a life of pleasures – alcoholism and womanizing. He diverted the trailer-load of cement generously donated to the Catholic Church by philanthropists at Anum near BSU and used it to build the house he and his women call the “white house” in New GRA.

“Alia violated the Oath of Celibacy many times. The oath of celibacy is the state of a Catholic priest remaining unmarried and totally abstaining from sexual activities. But here is a priest who has not only violated that oath but also had children with different women from Nigeria and abroad. The church confirmed his illicit acts and decided not to give him any parish to head. He is believed to have not less than 16 children by 12 different women.

“Some of his sex partners are married women. He has caused them to divorce their husbands. The reason he no longer had a parish was that once he was assigned to head a parish, one of his foreign women who is a Canadian with whom he had a child would write a petition to the Bishop. The church has not been able to reply her petitions and justify why Alia should be a parish priest.

On Fake healing masses, the media note indicted Alia, saying he deceived many unsuspecting people in the 1990s and early 2000s with fake miracles of healing of sick people. “Till today, he can’t point to anyone who is a well known person in any part of Benue State who was cured by his “healing miracles”. The good thing is that the church soon discovered his fake life and many people stopped attending his “healing masses”. Says the statement.

The media notes reads further: Alia lacks credibility. In politics, people’s antecedents are a prerequisite for trusting them with bigger responsibilities and Alia’s case cannot be different. We must ask questions. Who is Alia? Has he been a successful priest? If yes, which development did he bring to those parishes he served in?
What was his conduct and relationship with his parishioners and his relationship with his superiors?

His Failure As Priest

1. He started a perimeter fence at Anum and left it half-way.
2. Built a children’s church with mere wooden poles.
3. He didn’t even build a toilet there.

4. He merely repainted Father’s house within the Anum church premises and claimed that the repainting cost N120m. The missing church money has remained unaccounted for since then.

Alia left the Parish without executing any meaningful project within his five years as the senior priest in that Parish with all the foreign donations that he received on behalf of the church. His successor Rev. Fr Jude Ortese has so far spent 6 years in the Parish as a junior priest but has done remarkable things with meager resources at his disposal. He has completed the perimeter fence started by the church and also redesigned and rebuilt father’s house and finished the same with state-of- the-art facilities.

People must be held accountable for their deeds and be made to suffer the consequences of their actions and inaction. Alia has not done well in church leadership and does not qualify to seek higher responsibilities.