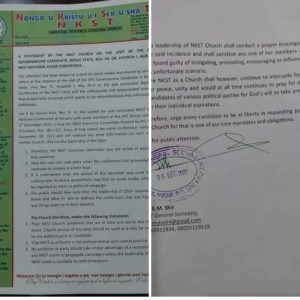 The NKST Church has disassociated itself from the way the suspended Catholic Priest, Hyacinth Alia
turned its National Choir conference to a political rally.

Rev Fr Hyacinth Alia is a disputed governorship candidate of the All Progressives Congress, APC in Benue State.

In a statement which the church condemned the actions of the disputed APC Governorship candidate in Benue tilted: “A STATEMENT BY THE NKST CHURCH ON THE VISIT OF THE APC GOVERNORSHIP CANDIDATE, BENUE STATE, REV. FR. DR. HYCINTH l. ALIA TO NKST NATIONAL CHOIR CONFERENCE” and signed by the NKST General Secretary, Rev. E.M Shir and made available to journalists, the Church leadership frowned at the conduct of the Benue APC guber candidate.

They vowed to sanction any of her members who may been found guilty of instigating, promoting, encouraging or influencing such an unfortunate scenario.

“Our attention has been drawn to a post on social media and shared by several others at the instance of the visit of the APC Governorship Candidate in Benue State, Very Rev. Fr. Hyacinth l. Alia, Ph.D to the just concluded National Conference of the NKST Choir and the unfortunate and unwarranted scenario that purportedly occurred which seems to be misunderstood and unfortunately publicized.

“Let it be known that, Rev. Fr. H. Alia visited the just concluded NKST Choir National Conference at Amaafu with some members of the APC Benue state on 1st December 2022, a time the NKST Executive Committee headed by the NKST President, Rev. (Dr.) D.Z. Anza, JP had visited the same conference, earlier on November 30, 2022 and left without any prior information on such a visit neither from Fr. Alia nor the leadership of the Choir.

“Therefore, the NKST Executive Committee was not active or passive to that audience.

“That the said visit took place when the conference had proceeded on a recession to resume in a later hour.

“It is unfortunate that the period of the recession was used for the unfortunate incident purportedly reported on social media, which can be regarded by many as a political campaign.

“The public should take note that the leadership of the Choir resumed from break and allow Fr. Alia addressed the conference, but was happy the way things went on in their absence.”

The statement continued: “The Church therefore, makes the following statement:

“The NKST Church condemns that act in total and warns that no NKST event, Church service of any kind should be used as a rally for campaign by any political party or candidate.

“No politician or party should take undue advantage of a recession time at any NKST event to propagate campaigns unless the leadership of such an NKST event is available to control excesses.

“The leadership of NKST Church shall conduct a proper investigation into the said incident and shall sanction any one of her members who may be found guilty of instigating, promoting, encouraging or influencing such an unfortunate scenario.

“The NKST as a Church shall however, continue to intercede for our land for peace, unity and would at all time continue to pray for all political candidates of various political parties for God’s will to take preeminence in their individual aspirations.

“We therefore urge every candidate to be at liberty in requesting Prayers from us as a Church for that is one of our core mandates and obligations. Above for public attention,” it concluded.