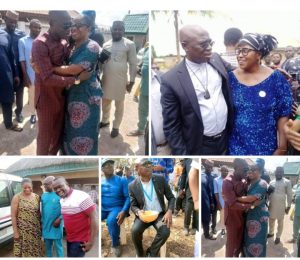 The suspended priest who is desperate to become the Governor of Benue State was yesterday at IBB Square among a small group of APC supporters where he again spewed his empty and deceitful promises. I have never seen a man who lies like Hyacinth Alia. He sounds as if he is an angel or a messiah who just came down from the skies to save humanity and we do not know anything about him. Haba mallam!

Yesterday, he was again promising Heaven on earth, saying he will turn Benue to Dubai with development and make every Benue person a billionaire. But he didn’t tell us how and where he will get the trillions of naira to fulfill those lofty promises. Our people say the mouth has no bone (zwa ngu a kuhwe ga) so every liar uses it freely.

The renegade priest has never spoken about his plans to improve Benue State revenue. He only talks about how to spend money. His view about governance is spending money not making money for the state. But that is what you get when a man who took vows to remain a priest all his life later violates the vows and goes to seek political power and the pleasures of this world.

What does Alia know about governance that he boasts of fixing Benue State? What development did he bring to the churches where he worked as a priest?

In all the places he served as a priest, there is no record of development. He could not build even a toilet in any of the churches. The only records to his name are mismanagement of funds and embezzlement to build mansions and hotels for himself and his women.

This same priest deceived many unsuspecting people in the 1990s and early 2000s with fake miracles of healing of sick people. Till today, he can’t point to anyone who is a well known disabled person in any part of Benue State who was healed by him. The good thing is that the church soon discovered his fake life and many people stopped attending his “healing masses”.

Former reverend Fr Alia is a dangerous man. He will be ruthless with the finances of Benue State, if elected. If a man has no fear and respect for the oath he took on the altar of God, why will he be afraid to squander public funds?

Benue people be wise. Akume wants to hoodwink you. He has brought Alia and chosen his nephew Sam Ode as running mate. As far as Akume is concerned, Benue State must remain his personal enterprise. He is retiring from politics next year when Buhari’s government comes to an end so he is desperate to have a source of survival.
Don’t forget that Akume does not own even a small farm. He has been depending on government resources since 1999.

One thought on “Alia, his fake promises, corruption record and sex scandal: A candidate who couldn’t build church toilet is promising to develop Benue”