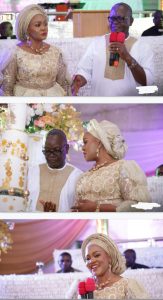 Wife of Benue State Governor, Dr. Eunice Ortom has doled out 25 million as empowerment to 58 women and youths in Guma Local Government Area.

Mrs Ortom who is the founder of  Eunice Spring of Life Foundation, ESLF said the gesture is her little way of giving back to the society.

The First Lady who stated that the beneficiaries were selected from Nzorov, Kaambe, Saav and Abinsi council wards of the local government as the first set of beneficiaries said the cash and the kits were to support them in farming and other business ventures.

She said that the gesture, which was actively supported by some of her friends,  charged the beneficiaries to utilize the funds judiciously to make it grow and make them self-reliant and empower others.

Dr. Ortom thanked her husband, Governor Samuel Ortom for the support he has given her and her pet project, the Eunice Spring of Life Foundation, ESLF to actualize the desire of uplifting the living conditions of Benue women and youths.

The Governor’s wife also expressed appreciation to God for blessing her with the golden age of fifty and other good things of life, stressing that the support of Benue people through prayers has also provided a shield for her and the family.

In a brief remark, Governor Samuel Ortom thanked his wife for standing in the gap through ESLF to reach out to the people, especially women and youth in the area of education, health and economic empowerment.

While admonishing the beneficiaries to make judicious use of the empowerment kits and funds to create a positive impact in their chosen areas, Governor Ortom enjoined other youths to find something doing no matter how little.

Also speaking, the Deputy Governor, Engr. Benson Abounu acknowledged the humility of the First Lady, pointing out she is a dedicated woman and an immense supporter of the Ortom-led administration.

Speaker of the Benue State House of Assembly and PDP Governorship can didate, Rt. Hon. Titus Uba who was Chairman of the occasion described the celebrant as a worthy mother to all who have redefined parenting and impacted tremendously in various spheres of life.

On her part, the Chairlady of the occasion and Chairman, Benue Internal Revenue Service, BIRS, Mrs. Mimi Adzape-Orubibi thanked God for the life of the First Lady acknowledging that she has been an industrious woman whose  humanitarian interventions for the less privileged and the vulnerable is immeasurable

They all eulogized the First Lady for her humility, support to her husband and the administration as well as the impact she has created in the lives of Benue women and youths

Earlier, President General, Nongov Women Development Association, Mrs. Esther Zendesha said the association decided to organize the Thanksgiving service to honour and celebrate the First Lady for what she has done for them as an organization and personally.

Resident Pastor of NKST Church, Gbajimba, Reverend Terhemba Iorshagher in a sermon, stressed that if not for God and His mercies in our lives, there will be no celebration.

He then enjoined the celebrant to continue impacting the society positively to attract more blessings from God.