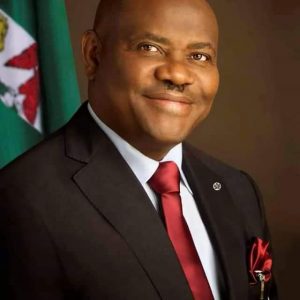 Governor Wike was reacting to Senator Ayu’s threat to stop Governor Samuel Ortom and others from contesting the 2023 general elections.

Saying that Ayu is very ungrateful to Governor Samuel Ortom who brought him and also became his guarantor even at the time better candidates were on ground to fill the vacancy then, Wike noted that the PDP national chairman lacks the capacity to disqualify anyone from contesting.

Wike however challenged Senator Iyorchia Ayu to dare stop any candidate of the party from contesting the 2023 general election if he has such capacity.

Governor Wike described such boast by Senator Ayu as evidence of arrogance and impunity because the threat, empty as it is, was directed at the Benue State governor, Samuel Ortom, who is his benefactor and guarantor when he contested for the party’s national chairmanship position.

“That also tells you the impunity, I heard when he said he would have stopped (Gov) Ortom from running. You see how ungrateful humans are. This was the same (his) governor Ortom who pleaded with us and said he can take this risk and let him become the national chairman.

The Rivers State governor wondered the basis of Senator Ayu’s comment on him being sacked when the issues on ground is the demand for his resignation.

Governor Wike said nobody has said that Senator Ayu should be sacked. He emphasised that it is important that people understand the difference between being sacked and the call for promises made to be kept.

“And what we are saying is, as a man of honour, if he (Ayu) has any, keep to your honour, keep to your integrity. So, the issue of people sacking him does not arise.

“So, saying that nobody can sack him does not arise. Nobody has said he must be sacked. For you to be sacked, there are procedures for sacking people.”

Governor Wike stressed that the call for the resignation of Senator Ayu is in agreement with the letter and spirit of the party’s constitution.

The governor explained that the party’s constitution clearly spelt it out that the positions of the national chairman of the party and the presidential candidate cannot be of the same zone as currently is the case.

“By our party’s constitution, there must be zoning for elective and political offices. He had said, knowing fully well that there was no way the presidential candidate and the national party’s chairman should come from one zone, that if the presidential candidate comes from the north I (he) will resign to allow the south to produce the national chairman.

“If at this point in time, you’re the national chairman of the party who has told Nigerians that this is what you’ll do if this happens, and now that has happened and you’re running away from doing that, so, how do you think that Nigerians will believe you assuming you try to tell them to vote for your party.”

Governor Wike said it is really up to Senator Ayu if he is still hell bent not to tread the path of honour in keeping his promise. He has however, advised Senator Ayu to be wary of whatever that is giving him confidence.

“What we are saying is that we want our party to win. But if you think you can do without keeping to the promises you have made, so be it.”

Speaking further, Governor Wike pointed to the fact that one of the reasons why Senator Ayu has been reluctant to leave office is because he wants to continue to superintendent over the PDP finances despite having failed to give account of how party primaries funds were expended.
“Why does he not want to resign? He is hoping that Nigerians will donate money to the party so he will superintendent over that money.

“He has already finished the one of N11 billion from party’s primaries. Account for it, he says it is in the account. Show the public the account. Print out the statement of account of PDP and let the world see how the N11 billion was expended.

“And this is the party that all of us have laboured to takeover power from the ruling party that we said has done badly. And then the national chairman will open his mouth to talk about stopping contestants. Ayu shouldn’t say so. He tried it in Rivers State. He came to manipulate and try to put some gubernational aspirants, but he saw the result. We dealt with him.”

Governor Wike mocked those who are saying that they can do without the five PDP governors demanding for inclusivity in the party.

The governor reminded them that votes are not cast in the media, neither are elections won there, but in the units, local governments and States where those five governors are at home with their people. According to him, the outcome of the elections will surprise them.

The Rivers State governor said he will never allow anybody to use his name to become relevant as Osita Chidoka is trying to do.

Governor Wike stated when Chidoka was once denied the party’s governorship ticket in his State, he left the PDP to another.

Governor Wike maintained that he is a different breed of a politician, who do not and will not abandoned his party, but has resolved to remain in it to fight for inclusivity.