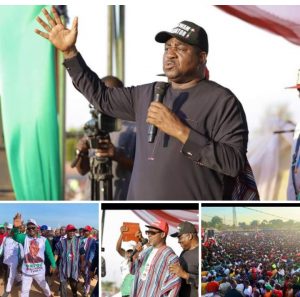 He also made it known that the governor of Benue state, Chief Samuel Ortom and the senator representing Benue South, Abba Moro, should be elected as senators for their respective zones in 2023 because they have what it takes to deliver federal presence and dividends of democracy.

The Chairman, Senate Committee on Power made these known today in Kwande local government, venue of the flag-off of his reelection campaigns.

According to Suswam, the National Assembly was a place for men of courage, focus and determination to attract federal presence to their constituencies.

He enjoined the people to elect the trio of Ortom, Abba Moro and himself as Senators as they have what it takes to synergize and offer effective representation.

Senator Suswam particularly rolled out the flagship projects he had executed in his senatorial zone and called on the people to re-elect him to consolidate on his achievements.

He noted that with the unity of Benue representatives in the National Assembly, he would be better positioned to do more.

Suswam also charged the people to vote for Titus Uba as Governor of the state in the 2023 governorship elections.

He added that as Speaker of Benue State House of Assembly, Uba has demonstrated competence and was already familiar with governance and would not be learning on the job to move the state forward.

Senator representing Benue South senatorial district, Senator Abba Morro in a goodwill message stated that he came in “solidarity to show that in Benue State we are one” stressing that the trio of himself, Ortom and Suswam when elected, would collaborate towards ensuring that the state is not shortchanged in the national power equation.

He pointed out that “the primary responsibility of Government is to secure lives and property” which he said the Ortom administration has continued to champion as a result of the failure of the Federal Government to provide security for citizens.

State Chairman of the PDP, Hon. Isaac Mffo had earlier received decampees from the APC into the PDP and presented party flags to all candidates for various elective positions in Zone A.

Chairman of the occasion, Prof Dennis Ityavyar declared that Zone A is ready to give all PDP candidates in next year’s election the largest votes and ensure that the party wins convincingly.

Thousands of party supporters thronged the ACC Adikpo football field for the PDP campaign flag off.