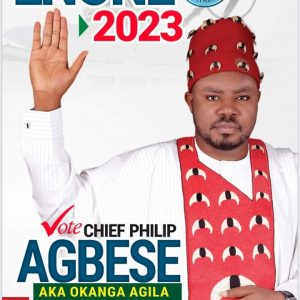 The suit instituted by Agada Linda Ene, of the All progressives Congress challenging the declaration of Chief Philip Agbese as the candidate of the All Progressives Congress, APC,for Ado/Ogbadibo/Okpokwu Federal Constituency for the 2023 general elections has suffered set back due to the joining of a non-juristic party as a defendant in the suit.

When the case came up on Thursday before justice Abdul Dogo, counsel to the All Progressives Congress, APC, Fidelis Mnyim drew the attention of the court to the joining of a non-juristic party, Benue APC, as second defendant in the suit as listed on the originating summons.

On the originating summon filed before the court, the APC is listed as the first defendant, Benue APC is second defendant, Independent National Electoral Commission, INEC, is third defendant, Philip Agbese is fourth while Sunday Oche is the fifth defendant.

Counsel to APC Mnyim insisted that the Benue APC which is listed as second defendant is non-juristic person, so cannot be party to the suit.

In an attempt to rescue the suit from the fatal blow it has suffered, counsel to the plaintiff, Eko Ejembi Eko SAN filed an application to amend the originating summon, but failed to serve the second defendant in the suit.

He however asked the court for another date and Counsel to APC Fidelis Mnyim did not oppose the application for adjournment, however, in his opposition to the application to amend the originating summons, he pointed out that the plaintiff didn’t follow the Court’s practice direction which requires anyone bringing in a motion for amendment to first seek the leave of the court.

Confident of victory, Adetunji Osho, who is the Counsel to APC candidate for Ado/Ogbadibo/Okpokwu Federal Constituency, Philip Agbese Philip, did not oppose the application for adjournment, but prayed the court to hear the motion for amendment as well as the substantive suit on the next adjourned date.

Counsel to the Independent National Electoral Commission, INEC, I. Magdalene and that of Sunday Oche also did not oppose the application for adjournment.

In the suit, Agada Linda is challenging the declaration of Philip Agbese as the APC candidate for Ado/Ogbadibo/Okpokwu Federal Constituency in Benue State.

INEC in their opposition to the suit, filed in court, submitted that, it monitored the election in all the 35 wards where Philip Agbese won.