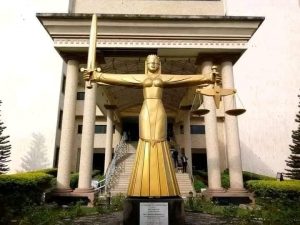 The Benue Coalition for Democracy has
called on the National Judicial Council, NJC to immediately call to order Justice James Kolawole Omotosho for his gross acts of impunity against the Peoples Democratic Party, PDP in Benue State.

This was contained in a press statement signed by Aloysius Gbakaan, Coordinator of Benue Coalition for Democracy.

This is on the basis that Justice Omotosho has deliberately withheld certified true copies of the court judgements he delivered on the
pre-election cases instituted by the PDP.

We recall that on Monday, November 28, 2022 Justice Kolawole at the Federal High Court, Abuja delivered judgment in a suit filed by PDP and its Governorship candidate in Benue State, Rt Hon Titus Uba challenging the controversial primary election which produced Hyacinth Alia as the APC gubernatorial candidate in the state. The court judgment was delivered in favour of the APC and its disputed candidate in very unclear terms.

We also note that the same Justice Kolawole had earlier on Monday, November 14, 2022 delivered judgment in suit between PDP & 32 Ors V INEC & 34 Ors involving State Assembly candidates on the PDP platform and those of the APC. In this case too the learned judge gave the verdict against the PDP.

While we do not intend to delve into the facts or substance of those above mentioned cases, as a pro-democracy group that seeks the cause of justice in all electoral matters across all political parties, we find it suspicious that many days after delivering judgment on the governorship matter, Justice Omotosho has not released certified true copies to the PDP and its team of lawyers when he is fully aware that the party and its candidate are time bound to appeal the judgment within 14 days.

The action of Justice Omotosho is clearly against judicial processes and smacks the height of impunity by every stretch of imagination. The judiciary is a hallowed institution whose integrity must be protected and upheld. The flagrant demonstration of impunity by Justice Omotosho in allowing himself to be manipulated to withhold copies of the said judgment to the PDP is totally unacceptable and not in tandem with extant laws.

As we reaffirm our confidence in the judiciary as an institution that serves all Nigerians irrespective of political affiliations, we therefore demand the National Judicial Council to urgently compel Justice Omotosho to do what is right in the eyes of the law by releasing the judgment to the parties concerned so that they could seek further redress if they are not satisfied with his verdict.

The sustainability of our democracy and particularly the electoral process can only take deeper roots if the judiciary upholds its integrity. We are confident that the National Judicial Council will wade into the Benue matter and save the judiciary from being dragged into disrepute.