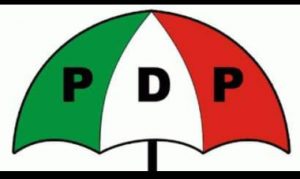 The Peoples Democratic Party, PDP has proven time and again that it is the party which truly cares about the needs of Nigerians. PDP does not claim to be the messiah. Its candidates also do not call themselves messiahs. But when the party wins, the people win. Those elected on the platform of PDP know that they have a pact with the people. This is not the same with the other political party of “messiahs”.

PDP thrives on internal democracy. The party gives every member the opportunity to actively participate in its activities, including the right to freely nominate and be nominated. In Benue State where PDP conducted a free, transparent and credible governorship primary election this year is an example. That’s why there is no PDP guber aspirant in court against the candidate Rt Hon Titus Uba.
Here again, the other party has failed the integrity test. Look at what they did in Benue State during the last primaries. The uncountable court cases facing their disputed candidate summarize the story.

Even when compared in terms of national outlook and political philosophy, PDP is miles ahead of the other party. The founding fathers of PDP are known political thinkers and statesmen who believed in the pan-Nigerian project and made commitments and enormous sacrifices to promote national unity. They were guided by Nigeria’s history and cultural diversity.

The other political party is a sectarian group. It is an agglomeration of regional parties which merged for the sake of capturing power. The moment they succeeded in getting power in 2015, their sectarian fangs bared. Nigerians whom they claimed to love so much became their enemies. Key appointments were given to one section of the country under the guise of “competence”.
That political party has taken Nigeria from top to bottom, like the President promised when he was campaigning before the 2015 elections.

There are however certain aspects where the other party is better than the PDP. One of such areas is hypocrisy. That party is the undisputed champion of hypocrisy. It repeatedly contradicts its own statements, promises and values without batting an eyelid. In hypocrisy, the PDP is certainly no match for the other party.

The “messiahs” have destroyed the country’s economy within just seven years.
As PDP Governors Forum stated in a recent communique, “The Nigerian economy has continued to deteriorate and Nigerians have become numb and accustomed to bad economic news as exemplified by the inconsistent and differential exchange rate regime, high-interest rates, unsustainable unemployment figures and borrowing spree some of which have not been applied to important projects, and other bad economic indicators.

PDP handed over a $550 billion economy (the largest in Africa), but under the current administration, Nigeria is the Poverty Capital of the world.

In 16 years in power, the PDP cleared Nigeria’s debts of over $30 billion. However, in just a few years, the other party has returned Nigeria to the debtor status and borrowed trillions. In the first quarter of 2022, Nigeria’s public debt rose to N41. 6 trillion from N39. 56 trillion recorded at the end of December 2021. Sadly, we are yet to see what the borrowed sums have been spent on.

Once you have corruption allegations to answer before the Economic and Financial Crimes Commission (EFCC), all you need to do is defect to the other political party and your ‘sins’ are forgiven and forgotten.

Let me leave you with some stats on how the other party has taken this country from top to bottom. See it below:

In those days of PDP,

The Lagos-Abuja transport fare was N2,500

A bottle of Coca cola was N60

Now came the “messiahs” who accused PDP of destroying Nigeria’s economy. The “saviours” promised to set to work immediately. Now see below what they have done to save us:

A bottle of Coca cola drink is now N300

Nigerians now know the difference between PDP and the “messiahs”.