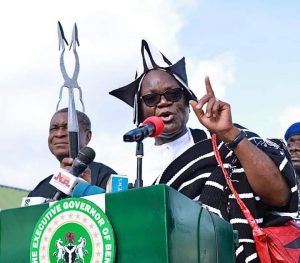 The Benue State Governor, Samuel Ortom has challenged Local Government Council Chairmen in the state to show greater commitment to the development of their respective council areas.

The Governor commended the Gboko Council Chairman for demonstrating capacity for leadership and recording achievements within a short time in office and urged other Council Chairmen to emulate him by taking the development of their Council areas more serious.

According to the Governor, “I challenge the Council Chairmen who are here to also invite me to your various local governments to commission something. With this, the people will feel the impact and tension will be reduced on the State Government.

He said he is committed to work together and complement each other, stressing that leaving it to the state alone is not enough as the Chairmen have a role to play just like what Isaac Mtom is doing.

He challenged the leadership of Association of Local Government of Nigeria, ALGON in the state to “Rise to your responsibility and tell your colleagues to ensure that they emulate the example of your colleague, the Chairman of Gboko local government to do the needful for our people,” Ortom stated.

Governor Ortom applauded the commitment of the Gboko Council Chairman and urged him to sustain the tempo, stressing that “With this leadership you have shown, you will not stop here, because you have demonstrated capacity in this little beginning.

“You have done well and I encourage you to continue. Your sacrifice for the people and fear of God will take you far,” he said.

He described Gboko as a special local government, noting that apart from being the headquarters of the Tiv nation, it is also home to all classes of people irrespective of their ethnicity or religion.

The Governor enjoined the people to own the newly commissioned modern market and take its security serious, pledging his commitment to providing all social amenities at the market as he has already done by constructing access roads in and around Gboko town.

They commended the council chairman for his sterling performance, saying that he has shown that young people were prepared for leadership.

The Gboko Traditional Council led by Ter Gboko, HRH, Chief Gabriel Shosum, bestowed the honorific chieftaincy title of the “Ishima i Gboko- (the Heart of Gboko) on Governor Ortom while the wife of the Governor, Eunice Ortom was given, ” Afa Ishima I Gboko.”

Chairman of Gboko, Hon. Mtom was awarded the honorific title of “Asortar U Gboko.”

Earlier in his remarks, the Gboko Council Chairman, Hon. Mtom explained that the Gboko Modern Market was built since 1993 by the then Chairman, Jon Uan.

He stated that his administration completed the project to boost the economy of the local government and the state at large.

He thanked Governor Ortom for his support to Gboko local government, pointing out the appointment of many Gboko sons and daughters in his administration, construction of roads and other infrastructure, provision of electricity transformer for the market among others.

The Council Chairman told the Governor that his administration has eliminated illegal and multiple taxation in Gboko local government to ensure that business activities thrive seamlessly.

While expressing gratitude to the Governor for offering young people the opportunity to contribute their quota in serving the state, he disclosed that some young men bent on perpetrating the illegal practice have been arrested by the police.

He assured the governor that the people of Gboko will continue to support his administration to succeed.

Tor Tiv, His Royal Majesty, Professor James Ayatse who was represented by the Tor Jemgbagh, Afatyo Ajoko pledged his commitment to peace in Gboko and the entire Tiv nation.

The Ter Gboko, His Royal Highness, Gabriel Shosum showered encomiums on the Gboko Chairman and thanked Governor Ortom for supporting him in his quest to bring more development to the local government.

Bishop of Katsina-Ala Catholic Diocese, Most Reverend Isaac Dugu who also graced the occasion, offered prayers for the successful transaction of business activities at the market.