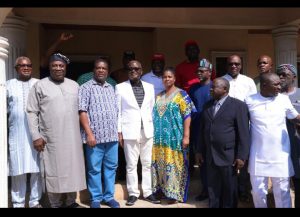 The Benue State Governor, Samuel Ortom says the Federal Government is not sincere to ending insecurity in the country.

Governor Ortom spoke Thursday, December 8th, 2022 when he paid a sympathy visit on his Commissioner for Housing and Urban Development, Chief Ekpe Ogbu who was recently kidnapped by herdsmen but released unharmed.

He reiterated his stance that the Federal Government was complicit in the lingering insecurity in the country involving terrorism, armed banditry, herdsmen militia, kidnapping and other crimes.

The Governor insisted that “others who are in Government today can pretend about this but Government is complicit at the Federal level. They are part of it. Whatever they are saying now is pretence. They are telling lies and they do not want to give attention to the insecurity situation.”

According to Governor Ortom, “If the Federal Government whose responsibility is to provide security for lives and property and who have the coercive forces of the security architecture of the country decides that terrorism, kidnappings and evil should end today, it will end.”

He maintained that, “If the Federal Government is in doubt, let them make an executive order just like the President makes executive orders in other areas and give me the responsibility to look after the coercive forces that are in Benue State. Tell them to take instructions from me, we will end the evil, armed robbery, banditry and everything, we will end it today in Benue State.”

Governor Ortom explained that “the problem is that the Federal Government is complicit, they are part of it and I accuse them. Why do herdsmen bring their cows in Benue State again when there is a law prohibiting open grazing. Is democracy not anchored by the rule of law?,” he queried.

While rejoicing with the Commissioner and his family over his release from the kidnappers unharmed, Governor Ortom vowed not to allow kidnappers in the state have a field day.

He warned that kidnappers will not be allowed to have a field day in Benue State, stressing that the state will not be a safe haven for kidnappers and other criminal elements.

Governor Ortom vowed that the State Government will never accede to kidnappers’ demand for ransom, emphasising that the provision for death penalty in the law criminalizing kidnapping in the state has been activated stressing that, houses used as kidnappers den will be demolished.

In his words, “We are not going to relent on this war and there is no way we will compromise and allow kidnappers to have their way in this state. I challenge our people to rise up and not to allow kidnappers in their communities. When you suspect them, don’t hesitate to involve the security agencies so that they will not come back again.

“I want to use this medium to send a message to the kidnappers. Benue State will not tolerate this and we are going to move very hard.”

Governor Ortom further stated that for the kidnappers to have dared to kidnap a Government official, it was a clear indication that they have declared war on the Government and charged communities to rise up in support of Government’s effort to declare war on the kidnappers and armed robbers in the state, adding that anyone apprehended will be dealt with according to the law.

He charged communities in the state not to accommodate kidnappers and must step up intelligence gathering and report suspicious persons to security agencies.

While recounting his ordeal in the hands of kidnappers, Chief Ogbu
disclosed that from interaction with his abductors, the mission was solely to kill him.

He particularly noted that his driver became the most targeted when the kidnappers discovered that he was Tiv and is from the same tribe with the Benue State Governor but for the mercies of God they had returned alive.

According to Chief Ogbu, although the identity of the kidnappers who were heavily armed could not be known to them since they had disguised in camouflage of conventional security agencies and masked their faces, they constantly communicated in Fulfude, a language spoken by the Fulani, and were freely traversing Ado, Ogbadibo to Oju and seemed to be in control of the forests in the axis.

He expressed gratitude to Governor Ortom for his love and for standing to protect Benue territory and enjoined him not to back down from sensitizing Nigerians on the need to escape from the looming national catastrophe no matter the victimization, blackmail and attacks on his person and office.