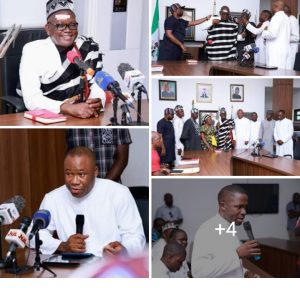 Faith-based and community stakeholders from Adaka, a sprawling settlement on the outskirts of Makurdi, the state capital, have commended Governor Samuel Ortom for providing basic amenities and infrastructure for the benefit of the community.

The leaders gave the commendation on Wednesday, September 21st, 2022 when the Superior General of the Via Christi, Reverend Father Theophilus Hwande and the Ter Makurdi, His Royal Highness, Chief Vincent Aule, led Priests and other community leaders of the community to pay a visit on Governor Ortom at the Benue Peoples House, Makurdi.

Reverend Father Hwande said the purpose of the community’s visit was to express gratitude to Governor Ortom for what he described as the Governor’s “special love and kindness to us in Adaka community.”

He identified building of a special secondary school, provision of electricity power transformer as well as provision of security as some of the areas the Governor Ortom has reached out to the community.

The clergyman told the Governor that, “We may not be able to chronicle all that you have done for us but suffice to mention all that stands out. Recall that in the past, we approached you and asked for a secondary school.

“It was so instantaneous how the request was granted by you. You built an impressive gigantic special secondary school in our community thereby launching Adaka onto the world map. We are deeply grateful for this gesture.”

While acknowledging the gains the Governor has recorded in ensuring security of lives and property in the state, the Catholic Priest noted that the Governor at the height of killings in Adaka, dispatched men of Operation Whirl Stroke to the community, stating that with their presence, the community has enjoyed relative peace.

He further decried persistent attacks on Christians in the country, saying “You are also very much aware of the wanton, reckless and frequent attacks on Churches and kidnap and killing of priests and Pastors in Nigeria. This is abominable and all efforts must be made by government and security forces to bring this situation to a complete stop.”

According to the Catholic priest, “Today we are faced with all kinds of plans and tricks with the singular purpose of annihilating Christianity in Nigeria, be it killer-herdsmen, Boko Haram, bandits, Muslim-Muslim Ticket, Fulani-Muslim to Fulani-Muslim succession, Ruga, livestock transformation plan, take-over of water ways.

“These and many more are hydra headed evil plans against Christianity in Nigeria and in active connivance with the Federal Government of the day,” he lamented.

Also speaking, the Ter Makurdi, Chief Aule lauded Governor Ortom for the construction of roads and other critical infrastructure in his domain and appealed to the Governor to extend the modern market road under construction to link Adaka community, urging him to remain steadfast in tackling challenges confronting the state.

The cleric then informed the Governor that the community would like to host him to a thanksgiving Mass in December and appealed to the Governor to grace the proposed event.

He pointed out that Governor Ortom’s investment in Adaka community has contributed to the development of the area particularly in the area of agriculture.

On the request for extension of road to the community, the Governor said it was already captured in the state budget and assured that it will be carried out before his tenure expires next year.

The Governor also promised to attend the proposed thanksgiving Mass in his honour at a convenient time.

The Governor also reiterated his call on Benue people to take issues of security more seriously, emphasising that it was a collective responsibility to protect the communities from being take-over by invaders.