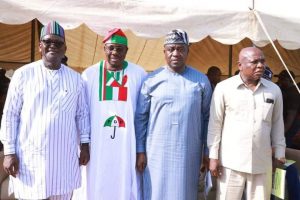 Benue State Governor, Samuel Ortom has given assurances to the people of Sankera that the ban on motorcycles and Toyota Corolla, popularly known as ‘duck nyash’ will be lifted in the area once he gets a firm commitment from leaders of the area  to end banditry and kidnapping.

Sankera intermediate area is made up of Katsina Ala, Ukum and Logo local government areas.

The State Security Council had placed a ban on the use of motorcycles and Toyota Corolla, otherwise known as ‘duck nyash’ because of its use in crime, which ravaged the economic, social and political life of the area.

Governor Ortom gave the condition Friday, November 4th, 2022 in his speech at the formal return to the Peoples Democratic Party, PDP by Dickson Orlu Pawa and other APC stalwarts from Sankera and their supporters into the PDP at Akume Atongo Stadium, Katsina-Ala.

Governor Ortom told youths in the area that once they give him firm commitment through their political and religious leaders that banditary, kidnapping and other forms of criminality will end, the State Government was willing to lift the ban.

According to the Governor, the restriction on motorcycles and Toyota Corolla brand in Sankera was to check insecurity in the area.

The Governor maintained that restoration of security required collective efforts, noting that Government and the people had a responsibility to ensure security of lives and property for development to thrive.

Ortom stressed the importance of unity of purpose among political leaders in the state to overcome the security challenges confronting the state, emphasising that once there is unity and cooperation, the enemies of the state will be defeated.

Governor Ortom while welcoming the decampees into the PDP, reaffirmed his confidence about the continuity of the PDP government in Benue State, stressing that the party was poised to win all its elections in next year’s polls.

He then charged the people to vote overwhelmingly for the party’s candidates, stating that the PDP was the only hope for a better country and state.

“I want to assure you that by the grace of God we shall work together to redeem and to ensure the continuation of PDP government in Benue State. We may have challenges, but I want to assure you by the time we deploy our conflict resolution mechanism in resolving those issues, we shall overcome and come out victorious.”

He continued, “PDP remains the only option that will salvage, rescue and rebuild Nigeria. I want to appreciate you all for coming back home. Let us work together to ensure that PDP wins the 2023 election,” Ortom charged the decampees.

In his remarks, Senator, representing Benue North-East Senatorial district, Dr Gabriel Suswam said, the PDP remains the only party that is committed to restoring peace and development to the country.

Senator Suswam appealed to youths in Sankera axis to eschew politics of violence and embrace peace for sustainable development to thrive he the area.

He challenged individuals aspiring on other political platforms in the area, to tell the people what they have done for the development of the area and stop politics of acrimony and calumny, emphasising that he remains commited to the restoration of peace and development in the area.

Also speaking, leader of the decampees, Hon Dickson Orlu Pawa who was Aide De Camp to Senator Suswam as Governor expressed happiness over his return to the PDP.

According to him, “It is a home coming moment”, restating his readiness to team up with other stalwarts and work for the victory of party at the polls, assuring that the PDP was the party of choice in Sankera area.

They appreciated the efforts of Governor Ortom towards security and working tirelessly to move the state forward under his administration.

In separate remarks, Commissioner for Agriculture and Natural Resources, Dr Kester Kyenge who spoke for political appointees from the area, House of Assembly Member for Katsina-Ala West Constituency, Jacob Orban for Assembly Members from the area and Chairman Katsina-Ala Local Government Council, Hon Alfred Atera all stated their commitment to support the party to victory.

Chairman of Logo Local Government Area, Mrs Salome Tor and Tersoo Anongo also gave goodwill messages for the women and youths respectively endorsing the PDP as main political party in Sankera, which they pledged to mobilize support for its candidates.