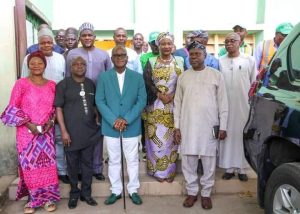 Benue State Governor, Samuel Ortom has called on the Independent National Electoral Commission, INEC not to postpone this year’s general election on claims of insecurity as speculated.

He also appealed to the Commission to consider extending the deadline for the collection of Permanent Voters Card, PVCs to enable all those who registered to obtain their cards to vote during the polls.

Governor Ortom barred his mind Wednesday, January 11th, 2023 when he paid a courtesy call on the new Resident Electoral Commissioner, REC, Prof. Sam Egwu at the INEC headquarters in Makurdi.

The Governor noted that, the skepticism that has arisen following a statement, purported to have emanated from INEC about fears of insecurity ahead of the 2023 should be discountenanced.

“Our prayer is that whatever happens, let us go ahead and conduct the elections because Nigerians and Benue State people are eagerly waiting for it. Let us not create a situation where enemies of this country will take advantage,” stressing that, “this elections must be conducted.”

“In my own little way of suggesting and helping INEC and of course the Federal Government, if there are specific areas where insecurity is intense and there are problems, they should work towards shifting the elections not postponing the elections and when the other places are completed, they can go back and complete it and announce results.”

“If it is possible, the Benue State Government will appreciate it so that everybody will have the right to collect his or her PVC. If it can be extended, that will be fine, but if not, we can still manage with the directive of INEC,” Ortom stated.

While congratulating the Resident Electoral Commissioner on his appointment and posting to the State, the Governor said “all that we seek and desire from you is to ensure the rules of your engagement, ensure fair play, ensure equity, ensure justice, ensure fairness for all. Don’t do anything to sympathize or to favour me or any other political party,” he emphasised.

Governor Ortom told REC that “on behalf of the Government and people of Benue State and our party, the PDP, I want to welcome you and to wish you the very best and to assure you that for us, we are not going to do anything that will create challenges for you but to cooperate for we know that power belongs to God.”

The Governor used the opportunity to appeal to Benue people and all the political parties to eschew violence stressing that “violence will not make anyone win any election. Let us be peaceful, INEC which is the umpire agency has given us the guidelines, let us keep to it.”

In his remarks, the INEC Resident Electoral Commissioner in Benue State, Prof. Sam Egwu stated that although the collection of PVC at the ward level would end on Sunday, the process would continue at the Local Government level till a few days to the elections.

Prof. Egwu however told Governor Ortom that his request for the extension would be forwarded to the Chairman of the Commission, pointing out that it was in the best interest of the Commission to give out all the PVCs.

He commended the Governor for ensuring a level playing field for all political parties in the state, noting that he has not heard any single incident of the opposition being denied the opportunity to reach out to their supporters.

The REC told the Governor that the Commission was working assiduously to ensure that people who have been displaced and were living in Internally Displaced Persons, IDPs camps across the state with their PVCs were allowed to participate in the elections.