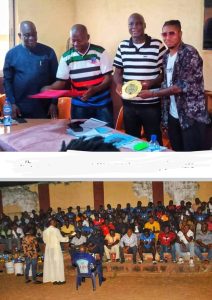 Iorfa gave this assurance yesterday in his remarks at a seminar organized by the management of Lobi Stars Football of Makurdi to equip the players with the laws of the game ahead of the 2022/2023 Nigeria Professional Football League (NPFL) season. The seminar was held at McCarthy Stadium, Makurdi Benue State.

In his remarks, the CEO opined that it is necessary to keep the players abreast with the laws of the game that would help them perform better in the new season.

Meanwhile, Chief Instructor of the seminar, an elite referee of the Nigerian Professional Football League, Iyorhe Ephraim Shaagba lectured the players on the laws of the game, saying, it is the only way that would guide them to play and avoid unnecessary tackles and misconduct that would be harmful to the team

Mr. Iyorhe further elaborated on the 17 laws of the game, which include; Component laws 1 and 4, Authoritative laws 5 and 6, Technical laws 11 and 12 as well as Operational laws 13 and 17.

He laid emphasis on law 12 which deals with fouls and misconduct whereby players fall prey to and encouraged them to play the game according to the laws and avoid misconduct behaviors like retaliations, excessive tackles, and abusive language that would compel the referee to sanction them.

Responding on behalf of the players, team captain Daniel Atsaka thanked the Dominic Iorfa led Management for creating an enabling environment for them to be equipped with the laws of the game and assured them of discipline and implementation on match days.

In a related development, the Dominic Iorfa-led Management further dedicated the Management/Staff and players of the club to God.

Preaching during the dedication, priest of the Catholic Diocese of Gboko and Spiritual Director of the Club Rev. Fr Emmanuel Asue prayed for a favored season devoid of injuries.

Fr Asue who is in charge of Saint Michael’s Rectory Bua, Amelladu said that there is every reason to thank God for last season, assuring the Management/staff and players of a better season come 2023.

Highlights of the events include handing over of award of Excellence for outstanding performance, which was presented to the VC/CEO, Mr. Iorfa by Social Media Summit Digest last week as well as the anointing of oil and the sprinkling of Holy Water on the Management/Staff and players of the Club for blessings.