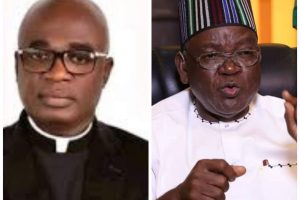 The governor of Benue state, Samuel Ortom has distanced himself from all the problems which the disputed governorship candidate of the Benue APC, Reverend Father Hyacinth Alia, is facing in the hands of his co- aspirants and aggrieved members of his party.

Governor Ortom spoke through his Special Adviser on Media and Publicity, Mr Terver Akase, to respond to a statement credited to Alia in Gboko yesterday where he described him as a fugitive and an insane man.

The governor also urged the “belligerent” APC governorship candidate to face the loads of litigations instituted against him by his co- aspirants as well as the scandals surrounding his life.

According to the statement, Governor Samuel Ortom wasn’t a member of the APC when Alia joined the party, and there is no reason for the disputed candidate to be attributing his woes to him.

Ortom in the statement also said that he wasn’t the one who forced Alia to accept the result of the “Yahoo Yahoo” primary which produced him as a governorship candidate.

The governor also made it known in the statement that he didn’t ask Alia to abandon his job as a Catholic priest because of politics.

“The belligerent governorship candidate of All Progressives Congress, APC in Benue State, Hyacinth Alia yesterday, November 6, 2022 in Gboko, took his obsession and ridiculous tirades against Governor Samuel Ortom to another mediocre depth. Since Alia abandoned his priestly calling and joined politics to aspire for the seat of Governor, the only message he has for the people is denigration of the person and office of Governor of the state. Governor Ortom is Alia’s lone ‘manifesto’. He levels verbal attacks on the Governor at every event where he is given the opportunity to speak. Even when he manages to muster something that sounds like a policy statement/campaign promise, he has always been at a loss pertaining to the ‘how’ of achieving whatever he claims that he would do, if elected.

“In a video posted on social media after yesterday’s event in Gboko, Alia could be heard describing Governor Ortom as a fugitive and insane person. For a man who is seeking to govern Benue State, Alia’s description of a sitting Governor as insane goes to reveal how low, intemperate, uncultured and unfit he is.

“The combative APC guber candidate is angry with himself and everyone else. He comes across as a frustrated and bitter fellow who sounds similar to a loose cannon. He appears to be regretting why he joined the governorship race. He is now a confused and desperate man who has gone berserk, showing symptoms of emotional insecurity and has found temporary succour in hurling invectives at real and imaginary adversaries.

“The legion of court cases against Alia seems to have made him lose grasp of himself, as his recent utterances bespeak the abrasiveness of blames on those who lured him away from the altar of God into partisan politics. But Governor Ortom was not a member of APC when Alia joined the party, so we wonder on which basis he sees the Governor as one of those who misled him to abandon priesthood.

“Alia is not being fair to Governor Ortom. The Governor did not ask him to accept the result of a yahoo yahoo primary election that is being challenged in court by a number of governorship aspirants on the APC platform. He therefore ought to redirect his frustration to the persons who conducted the sham election that produced him.

“The Governor is also not responsible for Alia’s poor understanding of the workings of government and what he is expected to be telling the people at campaign grounds. He should blame his handlers for not crafting for him an acceptable campaign message beyond accusing Benue people of killing themselves to please his sponsors who are patrons of Fulani herders.

“We advise the renegade Benue APC guber candidate to face his multifold of scandals which border on gross insubordination to his superiors, reported diversion of church funds and repeated violation of the oath of celibacy leading to numerous petitions against him by aggrieved parishioners in nearly all the places where he served as a priest before his contumacy and attendant suspension”