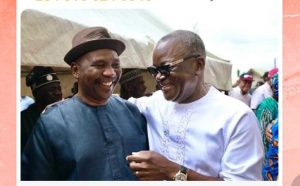 Benue state governor, Chief Samuel Ortom has accused the national chairman of the People’s Democratic Party, Iyorchia Ayu for mounting a smear campaign and blackmail against his person and office when he met members of the Board of Trustees of the PDP.

This is just as the governor who boasted that he will not succumb to intimidation or blackmail just because of his senatorial ambition also insisted that he will never trade the interest of the state to gain political power.

The meeting was at the instance of the Jemgbagh PDP Elders Forum, which sought to get clarifications on the cold war between the Governor and the National Chairman, Senator Iyorchia Ayu following calls by the Rivers State Governor, Nyesom Wike that the national chairman should resign.

Giving details of what snowballed into the current crises, the Governor dispelled insinuations that he is pulling down a Jemgbagh son.

Rather, he explained how he rallied support for the election of Senator Ayu against all odds.

He pointed out that he will never succumb to blackmail and keep silent in the face of injustice perpetrated by the PDP under Senator Ayu’s leadership.

Already, some pseudo-groups claiming to be speaking on behalf of the Jemgbagh political block have been stoking public blackmail against the Governor whom they accused of working against the interest of Ayu.

The Governor in a lucid narrative, took time to explain his role in the emergence of the PDP National Chairman, Senator Ayu and his position on the travails the Chairman is facing over calls for his resignation.

Governor Ortom maintained that power is given by God and “No one should blackmail me because of my senatorial ambition. Nobody should think he will intimidate me because of the senate election.”

According to the Governor, “If  God ordains me to be elected Senator for the Benue North-West Senatorial zone, no amount of blackmail or intimidation could prevent me from winning.”

Governor Ortom noted that since he is contesting for the Benue North-West Senatorial district seat, he has become a subject of intimidation and blackmail by some Jemgbagh stakeholders as a result of the internal crisis rocking the party with Ayu as the helmsman.

He said following the post-PDP Presidential convention with emerging internal wranglings, he advised Senator Ayu to reach out to aggrieved leaders of the party and plead for their understanding over calls for his resignation.

Rather than take his counsel, Governor Ortom lamented that Senator Ayu chose to take the ignoble path of disuniting the party by his actions and utterances.

The Governor insisted that the National Chairman did not maintain neutrality in handling the affairs leading to the PDP national convention, which produced Alhaji Atiku Abubakar as the presidential candidate of the party.

He stressed that “Ayu himself committed to resigning should a northern presidential candidate emerge at the northern caucus at the Bauchi State lodge.”

The Governor wondered why Senator Ayu is now reneging on his promise, which he voluntarily made before all the northern leaders of the party.

He explained that contrary to speculations that he is working at cross purposes with Ayu, he had actively rallied support from his PDP Governor’s colleagues and other critical stakeholders for the emergence of the national chairman with the interest of the state, especially to place Benue in national politics.

The Governor told the Jemgbagh stakeholders to also invite Senator Ayu and himself to a meeting so that they could both present their positions on the matter.

He insisted that despite the betrayals, intimidation and blackmail, he would continue to stand for justice for his people.

Chairman of the Jemgbagh PDP Elders Forum, Barrister Sam Tsumba said the Forum will invite Senator Ayu and Governor Ortom to further find a way to resolve the conflict.