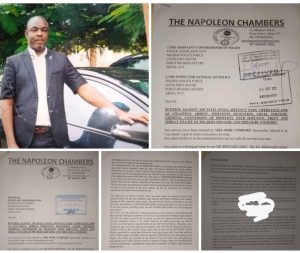 Today being the 5th September, 2022, a staff from the National Human Rights Commission and Mrs Comfort Ogbu ( Bernard Ogbu’s sister) and I went to have a meeting with the Commander of Police IRT, DCP Disu Olatunji in his SARS’ office at Abattoir, Guzape, Abuja.

On reaching there, we were informed that the Commander travelled out of Nigeria with a certain AIG but before he left, he had instructed his 2ic, ACP Adamu Said to attend to us.

We were led to the office of the ACP Adamu Saidu by one CSP Yough Solomon. It was in our presence that the CSP Yough Solomon briefed the 2ic. It was rather shocking that the entire briefing that was given to the 2ic bordered only on the whereabout of the car and other properties that were unlawfully sized and converted to personal use by the ASP FELIX. No mention whatsoever about our recent petition on the perpetual detention and torture of Mr Bernard Ogbu.

Upon being briefed, the 2ic directed that the ASP FELIX and the Investigating Police Officer ( IPO) in charge of the case be summoned to come to the IRT office to provide information about the case.

The 2ic stated that they would inform us to come whenever the ASP FELIX and the IPO would appear.

When we asked the CSP Yough Solomon as to the fate of our recent petition which borders on the perpetual detention and torture of Mr Bernard Ogbu, he answered by saying that the IRT cannot investigate that petition now until the IGP directs accordingly. And that they were still waiting for the directive of the IGP.

He appealed to us to give him one week to enable him write his report on the whereabouts of the car and other exhibits.

I observed that all the IRT police personnel that we interacted with were sympathetic to the plight of Mr Bernard Ogbu. They were also very angry at the unprofessional and unlawful conduct of the ASP FELIX.

My second observation is that the IRT personnel are threading with great caution. They told us how notorious and highly connected the ASP FELIX is. It was observed that the ASP FELIX may have his backers within and outside the Police Force and the IRT police personnel do not want to be in their bad books.

I also observed that the IRT department may not on itself has the courage to do any thorough and unbias investigation except they are directed by the “powers-that-be” due to serious public pressure.

Their misdemeanor (body language) had clearly suggested that their hands were tied!

The ASP FELIX is also not relaxing. I got confidential information that He had also reached out to his “power-house” for protection and calls were already being made to some of the IRT personnel to provide him with “soft landing”. I have also heard from reliable sources that plans are on the way to destroy the entire official records of this case to pave way for “OFFICIAL DENIAL” by the Nigeria Police.

As a trained lawyer, nothing overwhelms me but my agitation is getting heightened by the day. But we will not give up until justice is dispensed in favour of Mr. Bernard Ogbu.

From the beginning of my intervention in this case, I know that it would require tough fight and unusual professional maneuvering. These tactics shall be deployed appropriately. This is a long walk to Justice.

At this moment, the direct intervention of those in authorities (whether traditional or conventional) are direly needed in order to box the Nigeria Police authority to a corner for them to act.

The Idoma nation, the BENUE State Government, the youths, the international community, the media and all the lovers of justice and rule of law must rise up to the occasion now.

Injury to one is an injury to all.