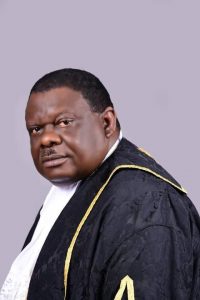 An Abuja Chief Magistrate Court has directed the Police to investigate two lawyers, Odusanya Damlola George and Fidelis Bemsen Mnyim for supplying false information against a former Attorney General of the Federation and Minister of Justice, Chief Michael Aondoakaa SAN, in a suit filed before the Abuja division of the Federal High Court.

Chief Magistrate Elizabeth Wonini, sitting in Zone 6, Wuse, Abuja, made the order on Monday, following a direct criminal summons filed by the former Attorney General of the Federation.

Recall that the direct criminal summons was brought against the lawyers pursuant to section 109 (e) and 110 (c) of the Administration of Act, 2015.

Lead counsel to the complainant, A. T. Kohol who filed the summons informed the court that “on or about the 28th day of June 2022, the defendants who are both within the jurisdiction of the court, being legally bound under oath did make statement which they knew to be false before the Federal High Court, Abuja in suit No: FHC/ABJ/CS/938/2021 and thereby committed an offence contrary to section 156 of the Panel Code and punishable under section 158 of the Penal Code.”

Lead counsel to the complainant, A. T. Kohol submitted that there was need for the defendants to be put in the dock since the matter was a criminal case, adding that following the absence of the 2nd defendant in court, the prosecution team is at liberty to apply for a warrant of arrest against him to compel his appearance in court.

However, the defence counsel vehemently opposed to his submissions on the grounds that a direct criminal summons being an application, the court is bound to look at it before further steps could be taken.

They specifically made reference to the provisions of section 89(5) of ACJA 2015, in submitting that the allegations contained in the summons should first be referred to the police for investigation, before further steps by the court.

Although both the prosecution and the court did not agree with their position, Chief Magistrate Wonini said it is in her character to always refer direct criminal summons to the police for investigations to avoid unnecessary and unsubstantiated petitions.

Accordingly, she directed that the direct criminal summons be investigated by the police within 14 days while she adjourned the matter indefinitely pending the report of the police investigation.

Pursuant to the instructions of APC to Messes. PRIME JURIS, the law firm of Chief Michael Kaase Aondoakaa, SAN to represent APC on the said case, a Notice of Preliminary Objection as well as Counter Affidavit to the Originating Summons on the 1/9/2021 personally signed by Michael Kaase Aondoakaa, SAN was filed and all the process filed the defence of APC were adopted on the 27/4/2022 by Aondowase Jacob Apera, Esq a counsel in the law firm of PRIME JURIS and the case was adjourned for judgement to the 30/6/2022.

However, The APC on the 28/6/2022 through Chief Mamman Mike Osuman, SAN filed a motion on notice seeking the leave of the court to reopen the case, one Odusanya Damilola George, a legal officer of APC deposed to an affidavit in support of the said motion wherein he stated in paragraph 10 (ii) of the affidavit that he was informed by F.B.Mnyim, Esq that Chief Michael Kaase Aondoakaa,SAN did not file any document in defence of APC, 10(vii) that Chief Michael Kaase Aondoakaa, SAN appeared in court personally on the 27/4/2022 after the meeting of the Stakeholders and conceded or compromised the case of the Plaintiffs without the prior recourse and consent of the 1st Defendant/Applicant (APC).

The above facts as stated in paragraph 10(vii) & (viii) in the affidavit of Odusanya Damilola George were a total deliberate and malicious falsehood to fabricate evidence to obtain judgment. It should be noted that Aondoakaa SAN eventually won the case