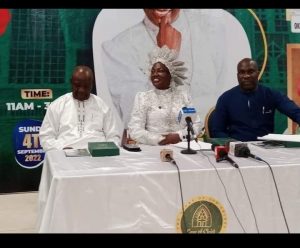 The founder of the Love of Christ Generation Church, Reverend Mother Esther Ajayi on Wednesday, said she has no issue whatsoever with Prophet Dele Ogundipe of Genesis Global.

Her reaction came on the heels of a viral video where Prophet Ogundipe made some critical remarks about her.

Mother Ajayi during a press briefing heralding the 15th anniversary of LOC, said the cleric remains his spiritual son despite his submissions in the video.

“Israel Oladele Ogundipe remains my spiritual son regardless of whatever he has uttered in the viral video because I don’t have any umbrage with anybody”, she said.