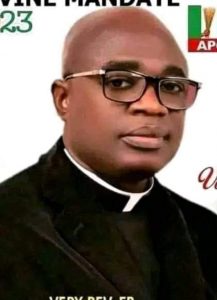 Benue Coalition for Democracy has indicted the disputed governorship candidate of the state All Progressive Congress, Reverend Father Hyacinth Alia.

The group in a statement made available to newsmen in Makurdi today stated that Father Hyacinth Alia is a fraudster who had been using God’s name to defraud unsuspecting people in Benue state and beyond.

According to the statement signed by the group’s president, Comrade John Orhii, the embattled APC governorship candidate is married to several women and also has children with them against the law of the Catholic Church.

The group said instead of Alia to remain in the church and preach the gospel of God, he is using the name of the same God to deceive people just because he wants to be governor and then loot the treasury of Benue state.

In its words, the group accused Father Alia of defrauding widows, orphans and vulnerable people of their money in the guise of performing miracles.

It further challenged Alia to show the public one crippled person that he has healed that is walking today. “We challenge him to show us one dead man that was dead and today he (Alia) has risen to be alive,” the statement reads.

The statement reads in part: “He should stop deceiving people, collecting money from poor widows and orphans and people who have nothing, dipping salt in water and selling to them and collecting money.

“Gone are the days of doing 419 to people. Benue State is too advanced to be lured into 419 business. After all, he is a suspended priest. A suspended priest who can not offer mass.