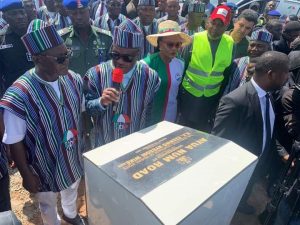 Members of the G-, Governors Nyesom Wike, Okezie Ikpeazu, Ifeanyi Ugwuanyi and Seyi Makinde today lauded their colleague, Governor Samuel Ortom of Benue state over the road and electrification projects that were commissioned in the state today.

Rivers state governor, Nyesom Wike acknowledged the importance of roads for its economic gains, saying, as an agricultural state, “If you don’t have roads to take your farm produce to the city, it makes no sense.

He added, “So, for this road and electrification, you have made life simple and easier for the people and that is what good governance is all about,” stressing that. We want to say we are proud of you that you have made promises and today is a promise fulfilled”

Governor Ugwuanyi in his short speech before commissioning the JKN Waku Road described  Governor Ortom “as a gift to Benue” stating that he has stood for his people.

In the words of the Enugu State Governor, Ugwuanyi after commissioning the road and electricity projects said, “Electricity is a strong enabler that drives economic development. Our expectation is that the people that live along this 14-kilometre that is covered by this project will be given impetus for greater economic growth.

The projects commissioned include, five different roads, and electrification projects.

Others are  the 2.0km  George Akume-NKST Yina Road now to be known as Sen. JKN Waku road at the cost of 560.4 million as well as the 2.10 km Kaanga-Akaya-Lucy Aluor-Otukpo Road now named Nyesom Wike Road at the cost 809.088 million.